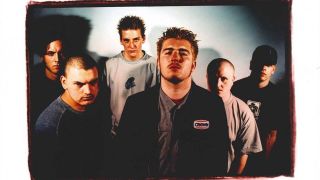 British sludge pioneers Raging Speedhorn are celebrating their 20th anniversary this October with a special show in London, bringing together the original line-up for one night only. We caught up with original guitarist Gaz Smith and drummer Gordon Morison to look back on Speedhorn’s career, the impact they’ve had, having a Top 40 single and the state of heavy music in 2018.

This year, you’re celebrating 20 years as a band! How does that make you feel?

Gaz Smith (Guitars): “Pretty old, haha! It’s a bit of a mindfuck when you talk to people at shows today, or in other circles, that were born after we started the band. Surreal, really.”

Gordon Morison (Drums): “Apart from making me feel old, I'm really proud that the band has lasted this long. When we started the band I never thought we would last six months let alone 20 years.”

The UK scene is a very different to beast to when you guys broke, what has been the biggest change you’ve seen?

Gaz: “Well, to be honest, I can’t really say. I’ve been living in Sweden for seventeen years, and even though those first six years I was still in Speedhorn, I was never really connected to ‘the scene’, if you like. I don’t really think Speedhorn were either, to be honest. We always seemed to fall between the cracks somehow, for better or worse. I haven’t read a rock or metal magazine for about twenty years.

“I can tell you the UK punk and hardcore scene is doing better than it has for a long time, though. I’m a lot more involved in that. But the biggest change, I guess across the board with music, is the impact of the internet. Musicians from all spheres are a lot more reliant on income from touring and playing shows now, since record sales have been diminishing rapidly for a long time. As far as any musical change in the UK metal scene, I really wouldn’t know. I couldn’t tell you what’s happening there these days.”

Gordon: “The stoner punk rock scene has never really changed. The ethic is still the same. If anything, we've gone back to that DIY ethic of doing it for ourselves now rather than relying on a label.”

What is your fondest memory of those early days?

Gaz: “There are so many. The excitement of getting on a ferry for the first time at Dover and heading off to Europe. Same with the first time we toured the States and Japan, too. My fondest memory, though, is when we played a big Tattoo The Planet Show at some arena in Birmingham. My mum and dad were sat side-stage in the wings, nobody else around, just the two of them sat there in the shadows with their arms around each other, looking on proudly. It’s one of the nicest memories I have.”

Gordon: “One of the best moments was walking onstage at Ozzfest 2001 to thousands of people and the crowd going nuts for us. We all looked at each other and thought 'What the fuck?!'”

It’s amazing that The Gush made it into the official singles charts back in 2001. How did that make you feel?

Gaz: “At the time, we didn’t really take it in. The song was a huge source of contention between us and the record label at the time, or the actual recording of it, at least. So, we were maybe a little too embittered by that to really appreciate what it did at the time. Like with a lot of things I guess, you appreciate them later in life, when you look back at them. It is amazing that a band like ours broke into the charts.”

Gordon: “I really thought the band was over when I heard that track. I remember me and Gaz hearing it for the first time, and saying to Gaz 'It’s all over, our fans are going to hate it'. How wrong was I?!”

Do you think we’re getting closer to rock and metal returning to prominence again?

Gaz: “Like I said earlier, I’m not really the person to ask. I mean, it seems rock and metal fans are usually very loyal. Like, AC/DC and Sabbath always pull a crowd, don’t they? I don’t really listen to that much metal anymore, but if say, the original line up of Entombed got back together and performed Left Hand Path, I’d probably go. I’d say that musical trends are also usually cyclical, so if metal hasn’t been that prominent in these last few years then it’s undoubtedly only a matter of time before it comes back around. One thing about metal, it has an incredible power of longevity.”

Gordon: “Yeah, I think with bands like Architects and Bring Me The Horizon getting really big it has become more popular again. And it’s great to see more British bands doing well.”

Gaz: “No, not at all. And it wasn’t a hiatus then, we split up haha! But it was the right time. We all felt ready to move on to other things by that point, both musically and otherwise.

Gordon: “No, I think at that point we all really needed some time away from the band and to sort our own lives out. At that point, John (Loughlin, vocals) Gaz and I had been in the band for ten years and felt it had just taken its toll on us by that point.”

Have you stayed involved in music? What have you been up to?

Gaz: “I haven’t not been in a band since I was 13. So, about 27 years now. I was playing with a band called Battle Of Santiago when we called it quits with Speedhorn. And then I joined Victims, and later started Diagnosis? Bastard! with Bloody Kev (vocalist on Raging Speedhorn’s Before The Sea Was Built album).

“I still tour all over with Victims and DB today, although on a more scaled-down level. I can’t go on tour for months on-end any longer. We’re a lot older and we all have young kids. Otherwise I’m still living in Stockholm. I ran a bar for a while, but now I’m studying for a degree in sociology and I work at a homeless shelter. I’ve been writing a blog for just under ten years and I have a book coming out based on that at the end of the year. So, pretty full on.”

Gordon: “Yes, I have my own splitter van touring business called Van Morison Tours and I tour manage bands. I've also released a record with a band called A Thousand Arrows. I've always been involved in music since I was 17. Touring and being in bands is the only thing I know.”

The original line-up are back for the show in October, how important is it to get everyone back?

Gaz: “Yeah, it felt like if we were going to celebrate the anniversary of the band starting then it could only have been with the original members. Although, as by way of the bill on the night, we’re trying to work out a way of having everyone who was ever involved on there.”

Gordon: “We're celebrating 20 years since the band actually started, so it seemed like a good opportunity for us all to get back together just this once. We're all spread around the world now, and some of us haven't spoken in years, so it’s going to be quite special to get together in a room again, get drunk and play some old songs.”

Did anyone need some hard convincing to be a part?

Gaz: “Yeah, me I guess. I’m not really one for looking backwards, and I’m pretty fucking busy all the time. Gordon, my best mate, asked me a bunch of times about doing the band again over the space of a couple of years, but I was never really that psyched about it and he gave up on asking me in the end. They reformed with my complete blessing, though. But this 20-year thing felt like if there was ever an occasion to do it again, as a one-off, then it was that.”

Gordon: “I think I was a bit worried about it at first because the band is still going strong and still releasing records and touring. I really didn't want this show to take away from all the hard work that we've done in the past four years and not having Jim (Palmer), Jay (Thompson) and Dave (Thompson) onstage will be really strange for me. But I'm sure the current line-up will be back out to play some shows later this year or early in 2019.”

What do you think is Raging Speedhorn’s legacy?

Gaz: “I like to think our legacy is that we paved the way for extreme, non-commercial music, to break through to a wider audience, relatively speaking, based primarily on touring the shit out of everywhere. I’m pretty fucking proud of that. We sold thousands of copies of the first two records, which I guess wouldn’t happen today with a band like that. And this was before the internet really took off, too. So, Slipknot, you’re welcome haha!”

Gordon: “When I'm on tour now, I meet a lot of bands who say they were listening to us when they were younger, and we were one of their favourite bands, so I guess we have had some impact on current music, which is awesome. But I wouldn't say we have a specific legacy or directly changed anything.”