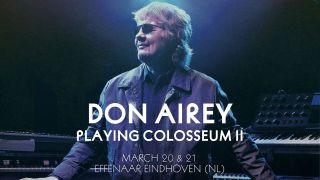 Prognosis Festival has announced four more names to next year's bill. Deep Purple keyboard player Don Airey will be performing a special Colosseum II set, Cynic guitarist Pasul Masvidal will perform a solo set, plus there will be performances from Rendezvous Point and Long Distance Calling.

This is the second year for Prognosis which launched last year. This year Prognosis will take place on March 21 and 22 at the Effenaar Venue in Eindhoven.

Tickets for the event cost ¢89 and are available from the event website.