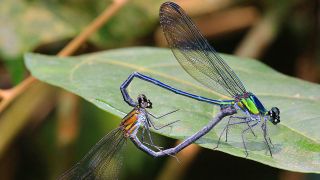 A species of dragonfly named after Pink Floyd’s 1969 double-album Ummagumma has made it onto the ‘Top 10 New Species’ list compiled by the State University Of New York.

The list was put together by the University’s College Of Environmental Science and Forestry.

The ‘Robust Sparklewing’ Umma gumma damselfly was one of 60 new species of dragonfly discovered in Africa last year – expanding the total number by almost 10% to 760. Conservation measures can now be considered for the new species – as the freshwater ecosystem comes under threat due to rapid development in the country.

Named due to the dragonfly’s genus, Umma, the term ‘ummagumma’ is also to be a slang term for sex.

The insect is not the first newly discovered creature to pay tribute to the music world.

The Aphonopelma johnnycashi, a black tarantula discovered near Folsom Prison in Southern California, was named after Johnny Cash earlier this year.

In 2014, Beatle-loving scientists in Brazil paid tribute to the late John Lennon with the spider Bomba lennoni.

Heavy metal singer King Diamond has a 420 million-year-old half-metre worm fossil named after him, while an Amazonian frog bears Ozzy Osbourne’s name because of its unusual bat-like call.

Pink Floyd’s Live At Pompeii: the saga of rock’s most epic ‘home movie’