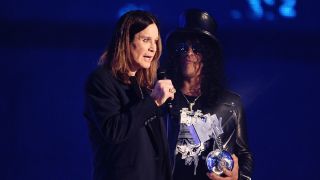 A new frog species of frog that sounds like a bat has been named after Ozzy Osbourne.

Scientists discovered the tiny creature in the Brazilian Amazon and noticed its unusual, bat-like call – which led them to name it after the Black Sabbath frontman who famously bit the head off a bat in 1982.

The frog was named Dendropsophus ozzyi by the scientists who discovered it. One of them, Pedro Peloso, tells National Geographic: “As soon as I heard its call, I knew it was a new species. I had never heard anything like it.

Peloso and colleagues found the 0.75-inch amphibian in 2009 as part of a survey of Floresta Nacional de Pau-Rosa.

During the expedition, the team found 21 specimens of the brown-and-orange creature, which has long, delicate fingers and toes.

The male frogs also have an unusually large vocal sac that inflates to produce its unique high-pitched chirping sound.

Ozzy was named Global Icon at last night’s MTV EMA awards show in Glasgow. The prize was presented to him by Slash.