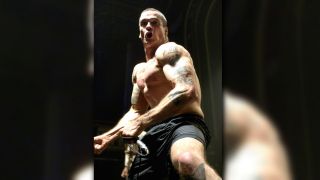 Henry Rollins has had a fossil named in his honour by a PhD student from the University Of Bristol And The Natural History Museum.

Luke Parry tagged the fireworm – a marine relative of earthworms and leeches – Rollinschaeta myoplena in honour of the former Black Flag frontman as the organism was a “muscly beast.”

Parry tells Phys.org: “Fossil muscle tissue is rare and usually not described in any detail by palaeontologists, but our discovery highlights that soft tissues preserved in fossils can offer details approaching what we can observe in living organisms.

“When choosing a name for our muscly beast, we decided to honour Henry Rollins, the legendary, muscular frontman of LA punk band Black Flag.”

Last year, Swedish palaeontologist Mats Eriksson named a half-metre worm in honour of King Diamond, while Ozzy Osbourne has an Amazonian frog named after him because of its unusual bat-like call.