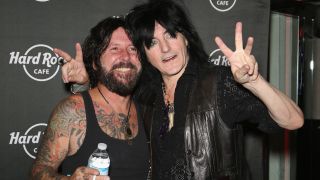 The band name has been the centre of dispute between the pair over the years following Tracii Guns’ departure from the group following the release of 2002 album Waking The Dead.

At one point, Lewis had his own version of LA Guns, and Guns the other. But the duo have put their differences behind them and have revealed plans for a run of summer shows – including an appearance at the Hair Nation Festival, which will take place at the Irvine Meadows Amphitheatre, California, on September 17.

The lineup is completed by bassist Johnny Martin and drummer Shane Fitzgibbon.