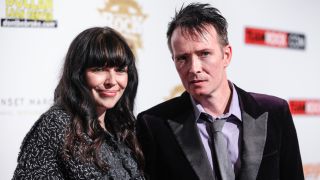 Scott Weiland left behind “an enormous amount of debt” when he died, according to his widow Jamie Wachtel Weiland.

The photographer married the former Stone Temple Pilots and Velvet Revolver frontman in 2013 and says she doesn’t expect to be given any money from his estate, said to be worth at least $2million.

Wachtel Weiland tells the Joe Howard Show (via Blabbermouth): “I think there’s this preconceived notion that Scott, being a rock star, must have just had millions in the bank, and that I’m probably just sitting pretty and just collecting money, and it’s the antithesis of the truth.

“He, unfortunately, passed away with an enormous amount of debt. There were a lot of loose ends that were never dealt with.

“I could have fought a lot more to be involved in the mess that was left behind, but the truth is, for a long time, I was completely paralysed. I was incapable of doing anything. It was hard for me to just get through the day, much less lawyer up and deal with all the legalities of an estate and probate.

“And the other thing, too, is that I really just want to move on with my positive memories of my husband. I want to move on as an artist. I am fortunate that I do have a career. I had a career when I met him. It was somewhat shelved for a while there, because I toured with and I was involved in his business.

“But I am lucky that I can go back to that now and get that going again, and I don’t really need to cling to his coattails and try to wring money out of his estate.”

Wachtel Weiland has made a claim for just $64,000 from the estate, money that he owed her.

She adds: “As far as the claim that I made, it was just very perfunctory. We had a prenuptial agreement, he was supposed to pay a certain amount of money.

“He only paid it twice. It’s just a formality. To be honest, I’ll probably never see that money, and anyone that understands how prenuptial agreements actually work and how his estate was left gets that.”

Weiland died in December of last year at the age of 48. He was found dead on his tour bus, where he was on the road with his band The Wildabouts.