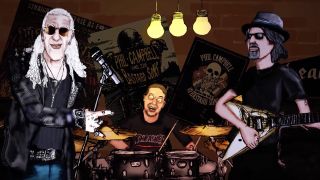 Phil Campbell has released an animated video for his new track These Old Boots.

It’s the first taste of material from the former Motorhead guitarist’s upcoming solo album Old Lions Still Roar, which will arrive on October 25 through Nuclear Blast.

The eye-catching promo was created by Ashley Miles at Hot Frog Animations and can be watched below.

Campbell will also hook up once again with The Bastard Sons for a European tour, with dates planned throughout the remainder of 2019.