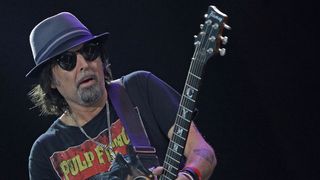 Phil Campbell got hooked on guitar in the early 70s, a fact reflected in many of his choices for his favourite albums. From being scared by Sabbath to loving Status Quo (before they became chart fixtures), the ex-Motorhead man's favourite albums have one thing in common: great tone.

On selecting his final list, Phil says, “It was really difficult choosing a top ten but you won’t get bored listening to these albums!”

That’s the one that got me into picking up a guitar. I think it’s been deleted. I still have it on vinyl. I had a load of my vinyl stolen years ago but the burglar must’ve been a bit stupid cos he didn’t steal that one. It has seven live tracks I think. He does Johnny B. Goode on it and Red House, and Voodoo Child (Slight Return). It’s just wild guitar playing.

When you’re nine or ten years old and someone lends you an album like that to listen to it makes you think ‘bloody hell!’ It was better than anything I was listening to before. My cousin loaned me it. He was a musician. I gave him it back. I had to buy my own copy! I don’t know why they deleted it. It’s madness. It’s probably been reissued like everything else he’s done. You can get bloody Womble reissues these days! [note: it was reissued in 2011].

I don’t know what it was about that. I think the inside cover was pretty good. They were all gatefold sleeves then. You know, it looked quite grand. But then, the music speaks for itself, the guitar tones and everything on there. I was still young when I first heard it and I liked the tones.

Years later, I realised Jimmy Page was just playing a Telecaster through Supro amps. I’ve since bought a Supro amp, a 1946 one. I haven’t actually played through it yet but it’s in my studio. There’s some good melodies on that record. You got Living Loving Maid (She’s Just A Woman), What Is And What Should Never Be… songs like that. And Thank You. It’s just a really nice record. It brings back some good memories of that time.

The one with the cactus on the front. I believe I still have it on vinyl. Yeah, I first heard that up at another cousin’s house. Witchy Woman is on there and Take It Easy. It actually makes you feel like you’re out in a desert, that looking up at the stars sort of thing. It was the first thing that got me to appreciate harmony singing. All Eagles albums, well, except for maybe one or two, are top notch.

I loved the cover with their jeans and long hair, head banging. This was a few albums before they went all poncey and commercial. They won’t mind me saying that! But Piledriver, you play it loud and it’ll knock your head off. It’ll get the party started.

I think the albums after that - Hello and Quo - were pretty good but after that it got a bit diluted with too much chart success I think. But there’ll always be a great band the Quo, I’m not going to knock them. They’re fantastic.

I was a big Deep Purple fan. That album can be a real shock to the system if you’re not used to that sort of music, especially the opening track, Fireball, the drum sound on that. It’s just wild, there’s only seven tracks on that one as well.

I don’t know where I first heard it but I think about that time and we used to hang about record shops and people would lend records. I remember it cost like £2.17 for an album then. That was a fair price. If it was £2.35 - they used to write it on the sleeves in pencil - you’d think, ‘oh my god. I’ll need to wait ‘till next week!’

It speaks for itself basically. I was a little older when that came out. It just blew everyone’s mind. It made everyone think, musically and sonically. And the playing. It was pretty much top notch. It’s timeless… It’s never gonna dull the senses, that one. How they managed to record that album before Pro-Tools is a small miracle.

Oldfield must’ve rented ten octopuses to help him with the mixing on that! How did he do that? All those faders… they must have had pieces of tape stuck on, and brought in the local farmer, and his wife, to do the faders. But that’s a beautiful piece of music. It’s genius.

I recommend that anyone who hasn’t heard it up to now, should get some really good speakers and listen to it. They’ll see where he’s coming from then. I never heard much of his stuff afterwards - Hergest Ridge etc - but Tubular Bells does it for me.

One of my cousins lent me that album when I was a lot younger and u got into that. I loved the gatefold sleeve. There’s something about the gatefold sleeve when you look back on them now, they must’ve made an impression on me in the early days.

Gregg Allman was an amazingly soulful singer. His singing on Ramblin’ Man and Come And Go Blues. I like his singing on Melissa but that’s on Eat A Peach. Duane Allman wasn’t on the album either unfortunately. He’d passed away by then. But you have the great Dickey Betts playing on there.

That can be pretty scary if you listen to that when you’re nine years old! There’s some weird noises on there. Those little whispers. Then you’d read the lyric sheet and start to get scared.

I like his [Tony Iommi’s] dark tones. With a lot of guitar music, it’s all about the tone. It’s very important that you get turned on by the tone. Anyway, that’s how Sabbath should sound. That’s a brutal slab.

His tone is so beautiful all the time. I was lucky enough to see him play years ago and from outside the hall, when I was waiting to get inside, he was sound checking and his tone was just unbelievable. There are some great songs on that album and you’ve got David Crosby and Graham Nash singing backing vocals.

My favourite track on the album is called The Blue. He uses a [Digitech] Whammy pedal for the solo. Lots of people use Whammy pedals - where it goes up an octave - but he’s just got it right.