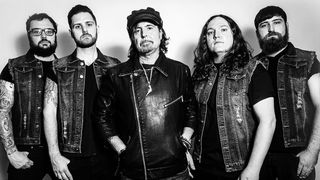 Phil Campbell And The Bastard Sons

Phil Campbell And The Bastard Sons have released a lyric video for their debut single Big Mouth.

The track is taken from the band’s upcoming, self-titled debut EP, which is released on November 18 via Motorhead Music.

Led by former Motorhead guitarist Campbell, the band includes his sons Todd, Dane and Tyla along with vocalist Neil Starr.

Starr previously said: “You know what you’re going to get because Phil is the riff god. You hear those Motorhead riffs – Phil wrote a lot of those.

“So there’s elements of that coming through in the music. I bring my own style to the band, but it’s just rock’n’roll music, I guess.”

The band launch a European tour later this month.