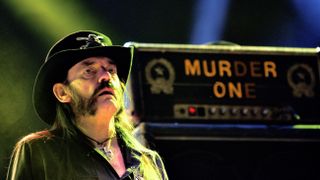 Lemmy on stage with his Murder One amp (Image credit: Getty)

Metallica frontman James Hetfield has revealed that one of the tracks on the band’s new album is about late Motorhead frontman Lemmy.

The title is a tribute to Lemmy’s favourite Marshall Super Bass Head from 1976, affectionately named Murder One. The Metallica song features lyrics made up of Motorhead song titles.

In a question-and-answer session with fans on Sirius XM, Hetfield says: “Motorhead had a lot to do with Metallica sitting here right now. But just Lemmy, as kind of a father-figure, he helped us a lot.

“He was unafraid. He was a character. He was himself. He did his own thing to the last breath. No matter who you are, how could you not be inspired by that?”

Ian ‘Lemmy’ Kilmister died last year at the age of 70 after a short battle with cancer.

Meanwhile, footage of Metallica’s performances of Master Of Puppets and Sad But True on Howard Stern’s radio show this week has been released and can be viewed.

Metallica launched a video for their track Moth Into Flame yesterday. They tour South America next month and they’ve confirmed two appearances in Denmark in February.