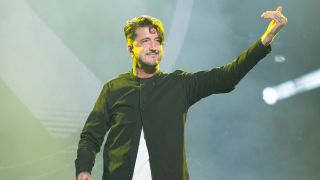 Of Mice & Men’s Austin Carlile says he was clinically dead for three hours as he underwent life-changing heart surgery following complications from the genetic disorder, Marfans.

The vocalist, who was baptised earlier this month, also recalls the epiphany he had while he waited to be sedated.

He exclusively tells Metal Hammer: “It was one of the hardest things I’ve ever gone through. It’s hard to go through something like that that’s dangerous in general, and just to not know if you’re gonna be there, four, five or six hours later. When I had my heart surgery, my heart was stopped.

“They put my head in a whole thing of ice, to stop your brain activity, you’re dead. I was clinically dead for three hours while they did the procedure.

“There’s so much stuff going through my head. Like, ‘Am I going to see my mum? What’s going to happen?’ Like, who knows, I was kind of excited. But the one thing I remember right before I went under, and before they put in the relax sedative into you, I was just sitting there and my sister and my dad were there and they said goodbye and started wheeling me back.”

He continues: “I just remember being so at peace, and I remember saying, ‘Look God, this is in your hands.’ It was out of my hands completely at that point.

“I said, ‘I have to have faith that you have a plan for me and you want me to do something with my life. And if you don’t, then it’s just going to end right here. And if it doesn’t, then I need to wake up and do that.’

“Ever since that heart surgery, for one, when I woke up that day, I’ve never been in worse pain in my life. When you have your chest broken open, it’s just breathing, and moving your arms, and everything, it’s insane.

Carlile adds: “I spent two weeks in the hospital recovering, and then I ended up getting pneumonia in my lungs, so I had to stay another week and a half, and Alan came and saw me in the hospital, and just that whole experience alone really taught me a lot about myself and it taught me a lot of where I wanted to go next.”

Pick up the next issue of Metal Hammer on August 16 for a world exclusive interview with Of Mice & Men to find out what they’ve been through since Austin’s illness and how it changed everything.

Of Mice & Men release their fourth album Cold World on September 9 via Rise Records. It can be pre-ordered now. They’re on the road with Slipknot and Marilyn Manson.