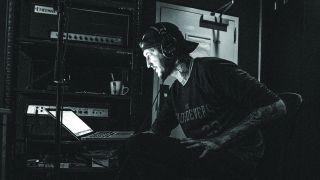 Austin Carlile is discovering light at the end of the tunnel

At the end of last year, we didn’t know what the future held for Of Mice & Men. Despite Austin Carlile’s determined pledge to come out swinging with a new album and more touring, the frontman’s relentless health issues threatened to destroy the momentum the Californians had worked so hard to achieve. Following a well-received return to the stage last month, we hopped in the studio with the guys to find out how work was going on album number four – and just how Austin is holding up after a year out of the game.

How was it for you going back into the studio after everything that’s happened in the past year?

Aaron Pauley, bass/vocals: “It was the first step back into ‘the ring’. The way the last cycle ended with Austin’s health, we didn’t know if we were going to make another record.”

Austin Carlile, vocals: “It was scary. One of the first lines I wrote in my notebook was, ‘Daunting task putting paper to pen, making myself vulnerable again’. Going into the studio is hard enough, but having to go in having dealt with a lot emotionally and spiritually, and jumping back into that place of, ‘Here I am, tear me apart, producer!’ But for people who haven’t heard our band, this is the record I’d want them to hear.”

Austin, you’ve been on an absolute rollercoaster in recent years – how has that played out on the album?

Austin: “It was a mixture of what I was dealing with personally, and having to heal and recover from, and writing about situations and experiences that we’ve all been through. We made this record about real-life situations like we always do, we took a look at what’s going on in the world, what’s going on with people, and we put it out there.”

A lot of nu metal elements crept into Restoring Force – will we see any unexpected influences this time around?

Aaron: “Last year, we were listening to a lot of the bands that made us love music, so there was a lot of stuff from the 90s and early 00s: A Perfect Circle, Alice In Chains, Mudhoney, Nirvana… we tapped into a lot of that stuff.”

Are you saying you’ve made a grunge album?

Aaron: “I wouldn’t say that it’s grunge, but it’s definitely got the visceral, raw emotion of music that’s not about being perfect and pretty all the time. It’s about being real.”

Austin: “You’ve got to follow your heart, and that’s something we’re really proud of with this record. From the six songs on there that are us yelling our faces off or the other five or six with Aaron and me singing, we’re letting out emotions that I’ve never put out on a record, ever.”

You also have a special guest on the new album called Cassy. Who is she?

Austin: “We met Cassy a few years ago through the Make A Wish Foundation – she was just one of those fans that we really connected with, and she’s such a sweet girl. We brought her out to the studio, played her the album, and for one of the songs we recorded her hand claps for a big, heavy breakdown. It’s her claps that are on it! The fact that we could take a fan who has been through so much… and now we have something of her forever. Her name will be on the record for her family and our fans to see, and that means a lot to us.”

Aaron: “It’s really easy to forget, when you’re doing this, how important it is to somebody else. Something as simple as a song lyric can change somebody’s life. It’s an immense burden, but we know that because we do this for the right reason, it doesn’t weigh us down. If anything, it’s pushing us to keep going.”

Cold World is out September 9, via Rise Records.