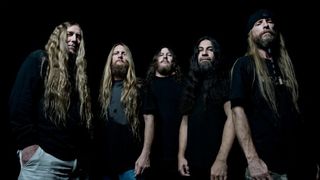 Obituary have made new song Loathe available to stream from their upcoming live album, Ten Thousand Ways To Die.

The record includes two new studio tracks and 12 live songs which were recorded across 11 cities on their Inked In Blood world tour last year. It’s due out on October 21.

Obituary say: “We are very excited about the live songs that we recorded on this last US tour. Joe Cincotta from Full Force Studio is also our live sound engineer and he had his full recording rig on the road with us, so we took advantage of the opportunity and recorded the show every night.

“The quality was amazing so we decided to include this as part of the Ten Thousand Ways to Die release to give the fans a little Obituary bonus. We selected songs from different cities so you will hear the sound difference between each song.

“Nothing was done to the songs after the live performance recording, so it gives you the real, true, unedited ‘live show’ sound and feeling that the fans experienced at each show.”

Ten Thousand Ways To Die can be pre-ordered on Relapse Records.

Obituary have added further dates to the Battle Of The Bays European tour with Exodus in October and November.

Obituary Battle Of The Bays tour dates with Exodus 2016