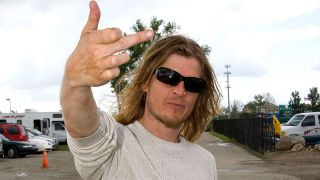 Wes Scantlin has come under fire after his fake car bomb plot to deter local thieves sparked a neighbourhood evacuation, according to TMZ.

The Puddle Of Mudd frontman rigged a fake explosive to his car outside his West Hollywood home after it had been broken into a number of times. The ‘homemade car alarm’ included a radio placed under one car with wires leading to the motor and a second vehicle with wires leading from the door to the gas tank.

But his plan backfired after frightened neighbours called the bomb squad – who evacuated four surrounding buildings before checking the vehicle. Though Scantlin was reprimanded by police, he was not charged with a crime.

The incident is the latest in a long line of misdemeanours involving the singer.

In February, Scantlin was involved in a standoff with armed police outside his Los Angeles home, while in March, Puddle Of Mudd walked off stage at a gig in Doncaster, England, leaving the singer alone to face the crowd.

Last summer he was involved in a drunken 100mph police chase, and in 2014, Scantlin found himself in hot water when he was detained on disorderly conduct charges in Milwaukee. He was also arrested for taking a joyride on a baggage carousel at Denver Airport.

Puddle Of Mudd have a string of US shows planned over the coming months.

The Downward Spiral of Wes Scantlin