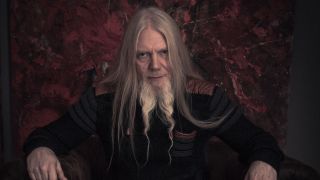 The track has been taken from the vocalist and bassist’s solo album Pyre Of The Black Heart, which was released earlier this year through Nuclear Blast.

Hietala says: “It’s time for one more live video from our European tour  – a tour that we finished still under some better stars.

“And here’s a couple of questions: Dear Oligarchy. How much of your worker/consumer base you can let die off and still make a profit? Wouldn’t proper social democracy make things safer for you too? Isn’t it you with the resources?

“For now, as always, we’ll keep on walking, and innocents will fall. Subjects might change, but we are on a Death March For Freedom.”

As for the album itself, Hietala says: “Let's put it this way: Nightwish is without any doubt my main band, and thanks to income from that direction, I don't have to be that commercially aware. What I mean is that when I was coming up with the musical thoughts for this solo record, I was able to do simply anything without limits.

“So if I had a goal, it was to not have any kind of limits, but to prepare an unpredictable, spontaneous, adventurous, ferocious and intimate solo record.

“Now when I am listening to the final album by myself, I can say with my hand on my heart that I – or rather we  – pulled it off. The record is a really diverse musical roller coaster ride that takes eager listeners into a world of strong emotions and deep feelings!”