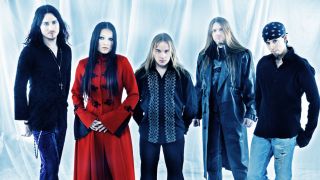 Tarja and her red coat with Nightwish in 2004

Tarja Turunen believes the video for Nightwish’s breakthrough hit Nemo was a big part of their early success.

The former Nightwish vocalist looks back on the impact of 2004 single Nemo in the current issue of Metal Hammer magazine and says the music video – which saw her sporting an eye-catching red coat – played its part in the buzz that developed around the band.

In the promo, Tarja’s red coat stands out in stark contrast to the snowy conditions.

Tarja says: “The video was dark, but striking and colourful – and it was very gothic. We had this idea for the red coat, a very strong colour against the now falling.

“If you think of symphonic metal bands with female singers, they’re usually dressed in black. I was always the weird girl with the weird voice, the operatic vocals, and then I wore this red coat.

“I still see girls at my shows dressed like me, so I guess it was really powerful.”

Despite the striking imagery of the Nemo promo, some TV channels initially refused to play it.

Tarja adds: “We had an initial, ‘No,’ from MTV at the time because they didn’t want to show a video that was in the snow.

“Some TV stations were not willing to show the video, but it was a big thing for us. Many new people got to know us through that song.”

Nemo appeared on 2004 album Once, which ended up being Tarja’s last record with the group. She left in 2005 and was replaced by Anette Olzon. The vocalist role is currently filled by Floor Jansen.

Issue 289 of Metal Hammer magazine is available now in print and via TeamRock+.

Behind the scenes with Nightwish at Wembley Arena