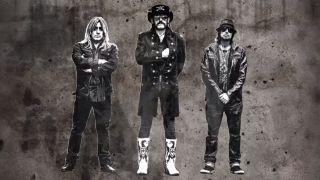 Motorhead have released a lyric video for their track Electricity.

Drummer Mikkey Dee recently explained how the trio had approached the record differently, saying: “Before, we used to be in a rehearsal studio, write the songs, record one at a time.

“But here we recorded live, right away, as we had the song. It’s a very spontaneous record – I think that works best for us.”