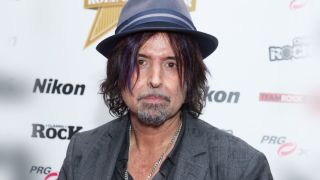 Motorhead say guitarist Phil Campbell is “recovering well” from the health problem that put him in hospital last week.

The band were forced to cancel their show in Denmark last night (November 30) after calling off two previous German appearances.

They haven’t offered any details on what’s happened to Campbell, 54.

Motorhead say: “A hearty thank you to all our loyal fans for their support, understanding and community right now.

“It has obviously not been an easy time. With Phil recovering well, we are doing everything we can to keep roaring right now.

“Your support is golden and very much appreciated.”

Campbell’s issues follow a series of health setbacks suffered by Motorhead mainman Lemmy, who most recently had to call off a handful of US shows in September.

The band – touring in support of 22nd album Bad Magic, released in August – are scheduled to appear in Gothenburg, Sweden, tonight, with three shows remaining afterwards on their European tour. They’re set to return to the UK next month, including a pair of 40th anniversary shows in London on January 29 and January 30. They’re also booked for next year’s Download festival.