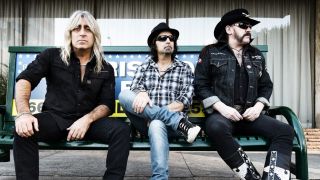 Motorhead have confirmed a special 40th anniversary show at London’s Eventim Apollo on January 29 next year, with guests Saxon and Girlschool.

And TeamRock+ subscribers can gain access to a ticket presale – as long as they’re signed up by 4pm tomorrow (Wednesday, July 29).

Lemmy and co will launch 22nd studio album Bad Magic on August 28 and the band have already announced European tour dates in November.

Tickets for the London show go on sale at 9am on Friday – but the presale is launched 24 hours earlier.

Every TeamRock+ member who’s signed up by 4pm on Wednesday will be sent email notification of how to access the advance purchase options.

TeamRock+ offers access to full magazine content from Classic Rock, Metal Hammer and Prog, plus additional features and offers. Find out more and sign up now.