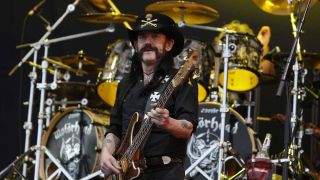 Lemmy’s return to live action has been hailed a massive success by Motorhead.

The band played a scheduled show in St Louis, Missouri, last night – their first performance since the frontman stopped a gig in Texas after three songs last week, saying: “I can’t do it.”

It followed a similar walk-off days previously, with the altitude of the Denver venue blamed for Lemmy feeling unwell, and the cancellation of a festival appearance for the same reason. The band then announced no further shows would take place until Lemmy was properly rested.

But yesterday they said the singer/bass player was ready to “give it a go” in St Louis.

And in a Facebook update posted after the show, Motorhead say: “St Louis. How lovely it was to kick every single one of your asses tonight eh!”

Fans agreed that the gig was a triumph. On Facebook, Lee Underwood says: “Fantastic show in St Louis. Damn good to have Lemmy back in the saddle.“ Eric Prather adds: “Awesome show. Lemmy rules. So glad I got to see you guys. One more thing off my bucket list.”

They are due to play at the Murat Theatre in Indianapolis, Indiana, tonight and have 10 further North American shows lined up for this month, before a European tour kicks off in November in support of new album Bad Magic.