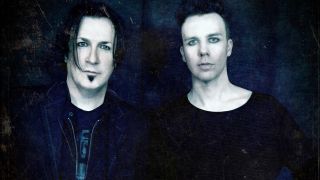 MGT have premiered their video for new track Every Little Dream exclusively with TeamRock.

The song will feature on their upcoming album Gemini Nyte, which is set to arrive on February 23 via Cleopatra Records.

Thwaite tells TeamRock: “While we were getting new ideas together for the album, while working on a bunch of my studio demos for Ashton to sing on, Ash also sent me a couple of his unreleased demos to check out.

“Every Little Dream immediately stuck out to me, appealing to my indie rock sensibilities with its hint of The Mary Chain and post punk.

“I reapproached and recorded the guitars in a much heavier punky vibe, also adding some lead guitars and a Steve Jones inspired solo – a nod to my heroes the Pistols and Generation X – and then asked the mighty Paul Ferguson of Killing Joke to add his powerhouse beats.

“It’s one of my favourite tracks on the new album, was a lot of fun to mix as well. Mont Sherar did a killer job editing the live footage in his unique and distinctive style”

Nyte adds: “Every Little Dream is a song I wrote and demoed years before meeting Mark. It was one of those songs that was waiting for the right context before making its way into the world.

“Mark’s guitars and treatment certainly bring something to the party and the track has become one of our favourites, as well as treat to play live. Hopefully that comes through in the video as well, which was shot during our little European tour last year.”

MGT have also lined up a run of shows across the US in March. Find details below.