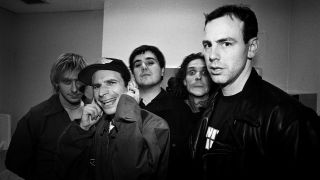 In 1987, Californian punk was in a sorry state. Black Flag, the Dead Kennedys and the Descendents had all split up, violence was increasingly common – if not a given – at gigs and creativity was at an all-time low. The entire scene was re-energised by a band experiencing the first in a series of revivals of fortunes. Bad Religion released Suffer in 1988 following the return of co-founder/ songwriter Brett Gurewitz. As godfathers of the SoCal sound, the band would 15 years later – somewhat ironically – play arena gig support to SoCal punk proteges Sum41.

Spurred on by a similar lack of creativity and stagnant musicianship, the underground DC scene on the west coast underwent what came to be known as ‘revolution summer’ in 1985. This saw the emergence of Dischord acts like Rites Of Spring, Ian MacKaye’s Embrace project, Shudder To Think and countless others who would have a heavy influence on post-punk over the following years.

As the 80s drew to a close, the entire US underground was more fertile than ever. No one had an inkling of the incredible attention and commercialism that punk would endure throughout the 90s – with a ready-made look and style available in high-street stores in the new millennium.

Fugazi – ex-Rites Of Spring men Guy Picciotto and Brendan Canty, plus Joe Lally and Ian MacKaye (ex-Minor Threat) – have never been surpassed in the post-punk scene. Repeater is exemplary musicianship. Canty’s astonishing drumming makes him sound like he has at least three arms (Brendan #1); the tightest rhythm section outside Black Sabbath is completed by Joe Lally’s galloping bass. MacKaye and Picciotto share the role of frontman equally. Not unlike Greg Ginn’s (Black Flag) style, their guitars are used for percussion and rhythm as much as for melody on this, Fugazi’s breathtaking debut.

Portland, Oregon’s hard-drinking and drugging super-sized Poison Idea reached a career peak with this album. Pure apocalyptic punk rock fury that only the likes of the UK’s Discharge could match, Feel The Darkness is an exercise in bleak power and blistering hardcore, influenced by Motörhead’s swagger (Just To Get Away and Gone For Good are both close runners-up to Ace Of Spades for mindless frantic rock) and MDC’s anarchic attitude. ‘What makes a person wanna be a cop?’ snarls Jerry A on anti-police tirade The Badge. The menacing Alan’s On Fire contains the best ever air guitar-worthy punk rock riff. Ever.

After following 1988’s genre-shifting Suffer with an album of songs sounding exactly the same as each other, 1989’s No Control, in the 90s Bad Religion had to mature or go bankrupt. Against The Grain was another turning point that saw their underground amateurism polished to a non-compromising rock bombast with the fist-raised Turn On The Light and singalong live anthem 21st Century Digital Boy. The creative progression to this album from its predecessors was astounding. Bad Religion had matured from barracking punks to hardcore intelligentsia in the time most bands would take a career to do.

It could be argued that by the 90s there wasn’t much more to be said for hardcore punk, but that didn’t stop a million third-rate imitators reheating the genre until it cracked and warped at the fringes. By the late 80s, hardcore punk had become a parody of itself, by the late 90s, a joke. Sick Of It All stood head and shoulders above them all. In Pete Koller they had a whirling dervish for a guitarist, in Lou Koller a singer who sounded like he needed emergency throat surgery after recording each song – but without descending into hardcore’s currently-in-vogue inaudible death metal-style growl.

Although quietly confident in their own abilities, the success of their major-label debut must have surprised Green Day as much as anyone else. With the benefit of hindsight, it was a foregone conclusion that their heavily Sturm undDrang-based lyrical content would find favour with emotionally clumsy teens the world over. Chuck in a few catchy hooks and some textbook anthems, add the fact that the band would struggle to match the success of Basket Case, Longview, and Welcome To Paradise for the rest of the 90s (until they reinvented themselves with 2004’s American Idiot), and Dookie is made all the greater.

‘Like the latest fashion/Like a spreadin’ disease…’ is one of the most recognisable opening lines from any 90s punk song. The Offspring may have spent the rest of their career reworking the musical blueprint of Come Out And Play – an eerily prescient tale of gun profligacy in playground America – but in third album Smash it rocketed the band to a major-label deal, and global success followed. In 1994 Nitro, Bad Habit, Gotta Get Away, the Smells Like Teen Spirit-mocking intro of Self Esteem (subtext: you’re yesterday’s news, grunge suckers) sounded refreshing. Released the week Kurt Cobain’s body was discovered.

Favourite NOFX albums are harder to pin down than jelly on latex, but with Punk In Drublic it felt like perennial losers NOFX had hit paydirt without heading to Majorlabelsville. Opener Linoleum is still one of their best and sums up the classic NOFX lineage: urgent and furious punk that still manages to maintain melody and poignancy. Despite Fat Mike’s satirical Anglophile humour, as with all the best comedians NOFX have an undercurrent of sadness. They could have been as big as Green Day, but were picky about exposure. As a result, they maintained a modicum of punk rock DIY credibility and relevance.

From the ashes of influential ska punks Operation Ivy, California’s Rancid may have seemed like a spoof of an early 80s, third-division UK oi punk band for most of the early 90s. But while we were waiting for the punchline to the gag, they went and released their third album …And Out The Wolves to much acclaim. The title deliberately baited the critics – as if main songwriter Tim Armstrong had been nervously hiding his talent up his studded leather all along. Songs like Roots Radical and Olympia WA. saw his songwriting come into its own, rather than being cartoon reheating of UK Subs and their shabby ilk.

The vehemently underground Weasel not only never got round to doing one single European tour, but also split up – twice – at the height of their enduring success. Proudly amateur pop-punk, their Ramones-meets-Descendents sneer eschewed politics in favour of more important subjects like girls ‘n’ break-ups. Trademarking the Weasel sound, My Brain Hurts was album three in a gold mine of a career (get them all), featuring the Converse stomp of Making You Cry, Cindy’s On Methadone and Kamala’s Too Nice, plus a storming cover of Johnny Nash’s 70s hit I Can See Clearly.

A melting pot of Madness, The Specials and The Blues Brothers, Boston’s plaid-clad MMB arrived hot on the heels of the yet another ska revival. After their second album More Noise… they scored a slap-in-the-face surprise No.1 US single with Let’s Face It in 1997. In Dicky Barrett, with his Lemmy-like razorblade gargle, MMB had a frontman cooler than Suggs, and in guitarist Nate Albert and Joe Gittleman ‘the bass fiddleman’ et al they boasted accomplished musicians. The punk party band and must-see live act of the 90s.

For more US punk and how The Offspring went global, then click on the link below.