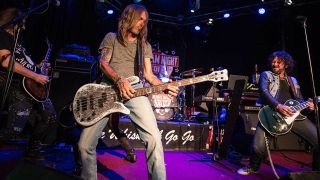 Ahead of a special Lemmy statue being unveiled at the Rainbow Bar & Grill in Los Angeles, neighbouring club Whisky A Go Go held a special jam session featuring the members of Ultimate Jam Night and more!

Members of Quiet Riot, Pantera, LA Guns, King’s X, Butcher Babies and more rocketed through over 20 tracks of Motörhead, Saxon, Judas Priest, Iron Maiden and everything else you could want on a Tuesday night.

The mass of revolving band members swapped in and out to celebrate the life of Lemmy and deliver their rendition of a bona fide rock ‘n’ roll classic. Throughout the night many unseen tag-teams of rock were formed, from Jesse Snider and Tracii Guns leading the pack through We Are The Road Crew to Carla Harvey and Rex Brown adding a metallic edge to Ace Of Spades – that you can see below!

Lemmy’s girlfriend Cheryl Keuleman was also in attendance at the Whisky, getting onstage and being serenaded by King’s X’s Doug Pinnick – well, as much as you can be serenaded during Jailbreak.

But what did the rest of the night look like? Check out our gallery below to make yourself seriously jealous.

All photos by Stephanie Cabral.

Lemmy: In His Own Words

Lemmy: "I watch TV, I play a bit of music and I chase women"

Lemmy: I Never Thought I'd Be A Grown-up!