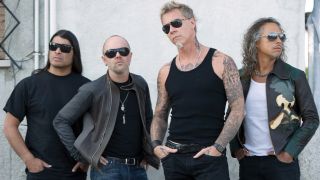 Metallica have announced that they’ll play in Hong Kong for the first time in their career in January.

Earlier this week Metallica announced they’d head to South Korea on their WorldWired tour in support of their 10th album Hardwired… To Self-Destruct.

Now they’ve added a landmark Hong Kong date at the AsiaWorld-Expo to their itinerary – and it’ll take place on January 20, 2017.

The band say in a statement: “Monday we told you how excited we are to hit the ground running in 2017 with tour dates in Asia and we’re back today with a Metallica first – a show in Hong Kong.

“Thirty-five years and still beyond psyched to go to new frontiers, so this promises to be a very special night as we hit the stage at the AsiaWorld-Expo.”

Hardwired… To Self-Destruct will launch on November 18 on 2CDs along with a deluxe edition featuring a third disc. And it’s a decision frontman James Hetfield said was worth doing – despite the extra cost involved.

He reported: “There’s 12 songs, and they’re not all three-and-a-half minutes like Hardwired was. There’s some long stuff on there, and there’s some short stuff and some medium stuff. Metallica gets diverse, and we love that.

“I think maximum is 75 or 80 minutes, and then the sound quality starts to suffer, on vinyl especially. I think CD-wise, there’s a max on that too.

“we’ve got a bunch of songs that we love. So that’s what has to happen. For the extra dime it costs to make it a double, we think it’s very worth it.”

Metallica will play two shows in California this weekend. They’ll then head to South America with further dates to follow.