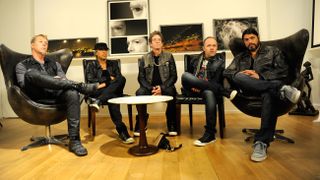 Lars Ulrich believes that working with Lou Reed on 2011 album Lulu gave Metallica a new understanding of the creative process.

The drummer says Reed’s enthusiasm in the studio impressed the band, particularly when it came to capturing spontaneous moments rather than spending unnecessary time trying to achieve a perfect take.

And Ulrich says Metallica took some of that attitude into the studio when recording upcoming 10th album Hardwired…To Self-Destruct, which is released on November 18.

He tells The Eddie Trunk Podcast: “When we made that record with Lou five years ago, we were stunned how a seasoned artist like himself could be that impulsive.

“We’d do one take of something. We’d make it up as we were going along. There was this completely momentary, impulsive energy. And we’d sit there and go, ‘That sounds great. I think we’re on to something. Now let’s start honing it.’

“And he’d go, ‘Fuck it! We’re done. I’m happy. That was great. It was a moment.’ And so I think that that kind of acceptance of just the moment was something that we had never experienced that close up.

“And I think that it definitely just gave us a new way to interpret a creative process, or gave us an additional layer, that one can be that impulsive and one can also be happy that what happened in that minute. It has a beautiful element to it that’s just part of that minute.

“It can be different, but can it be better? But being with Lou and the way that he would just sing one take, or whatever, and then just go, ‘Great. I’m happy.’ It was so cool.”

Lulu often comes in for criticism, with many Metallica fans deriding the album. According to official figures, it has sold less than 35,000 copies in the US.

But frontman James Hetfield last year insisted he was still proud of the record.

And Ulrich agrees, saying he wouldn’t change a thing about it.

“There’s nothing I would change,” he says. “The only thing I’d change is I wish Lou was still around. It’s weird being in New York and not being able to see him. I miss him. We got very close.”

Metallica tour South America later this month with further dates announced for 2017, and more to follow.