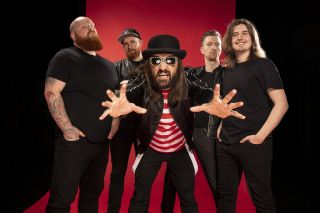 Massive Wagons have announced that they’ll release their new studio album House Of Noise this summer.

The follow-up to their fourth album Full Nelson will launch on July 17 through Earache Records and will feature 12 new tracks – the first of these In It Together will arrive this coming Friday (March 27).

Massive Wagons say: “We are in unprecedented times due to the virus which has decimated touring and festival income for musicians. The band and label discussed postponing the preorders for this album but after much deliberation we decided to go ahead with it.

“Times are hard and scary right now. We want to do all we know how to do – that’s bring music to people. Everyone needs to look after each other because we are all In It Together.

“We hope our music sends positive vibes to everyone affected by the situation, and see you on the road when normality is restored.”

Frontman Baz Mills adds: “I’ve always said that you cannot lie to your fans because they can smell an impostor a mile away. I couldn’t do what I do knowing I’m feeding people bullshit. Your songs, your stage show, interviews, ours are all 100% us, I’m 100% me and when I say this album is our best yet then I totally mean it!

“House Of Noise is absolutely our best song writing yet. It feels like 10 years in the making and through being signed with Earache we were able to record it at a dream studio with one of the best engineers, Mr Chris Clancy and for us possibly the best producer in the biz, Mr Collin Richardson.

“These guys took our songs, our ideas and abilities and collectively we managed to capture the best sounds we have ever recorded – we could not be happier with the outcome. It’s been an absolute dream recording this album, and we cannot wait to give it to rockers and rollers all over the world.”

House Of Noise is now available to pre-order through the Earache online store in a variety of formats – including limited edition red vinyl.