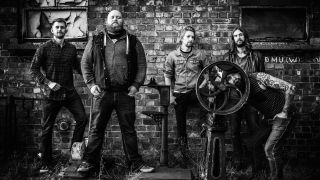 Back in 2008, Baz Mills experienced the world’s loudest epiphany. “We went to watch Airbourne, me and all the guys,” Massive Wagons’ frontman recalls. “It blew us away. They were absolutely relentless. I couldn’t hear anything for a week afterwards. It sounds dead cheesy, but it was like, ‘This is what we’re gonna do.’ Then we had a gig and we didn’t have a name. ‘Massive wagons’ was actually a code that we used between ourselves to talk about the buxom barmaid in our local bar, because she had huge cans, so to speak.”

True to that band name, Massive Wagons’ journey from their roots in the Lancashire town of Carnforth has been a steady trundle. They’ve released two albums – 2011’s Fire It Up and 2014’s Fight The System – and played the main stage at Hard Rock Hell. But all five members still have day jobs, and financed third album Welcome To The World via PledgeMusic. The graft is hinted at by new track Tokyo. “It’s a fun song about not making progress,” Mills explains, “like It’s A Long Way To The Top.

“This band has been our absolute life for seven years,” he continues. “People say to you: ‘Oh, we’ll see what you’re like when you get on the big stages.’ And you think: ‘Well hold on a minute, I can play big stages easy, because I’ve played the Dog & Dick to one man and his dog. People wanting to beat you up because you’re playing heavy rock, and they want to hear country and western, that’s a tough gig. But you’ve got to grin and bear it, haven’t you?”

The pain threshold of the line-up was tested during sessions for Welcome To The World. “We decided to camp at a fishing lake,” says Mills, “because it was only eight quid a night for all five of us, in two tents. But it was freezing, raining, ice. Horrific. We were lucky, because we became friends with Ozz from Black Spiders and he let us stay in his house.”

The new album was worth the hardship. It’s heavy and hooky, with harmony guitars, gang-chanted vocals and Mills’s rapid-fire delivery and wry lyrics.

“It’s just a hard-hitting rock album,” Mills says with a grin. “We’ve never had any gimmicks. We like the straight-ahead approach: great songs backed by a great performance.”

Based on the reviews so far, that might be enough. But could this unassuming bunch handle fame?

“I’ll give it a go. It’s got to be better than driving a truck.”

FOR FANS OF: Airbourne

“We’re massive Airbourne fans,” Massive Wagons’ Baz Mills says. “They’re right at the core of what we do. I don’t think I had that first album [Runnin’ Wild] off my stereo for a year. It was just the ballsiness of it. At the time, we were massively into the first two Black Stone Cherry albums too. Those were the two bands for us.”

Massive Wagons: Welcome To The World