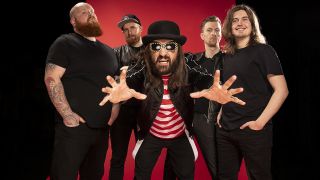 Bangin In Your Stereo takes the Wagons template – a thumping ruff, plus equal measures of Slade, The Wildhearts and Status Quo – and brings them to life with a stop-motion video in which the band are represented by Lego figures getting up to all sorts of wild mischief. Stars Wars fans will be delighted to learn that both Darth Vader and C-3PO have cameo roles in the production.

"Bangin was one of the last tracks we wrote for the album," says frontman Baz Mills. "We were playing through all the other tracks on a regular basis in practice and just realised what the album was missing. It was this song!

"It's a big old riffing rock'n'roller: a big statement, in-your-face kinda song. Loud, ballsy, catchy as hell and under three minutes. It’s a party track, goes down ace live, and is really fun to perform, I love the dual guitar riff off at the start, left and right, bang-bang like a boxer, then BOOOM, one up the middle, floored!"

Bangin In Your Stereo is the second song to emerge from Massive Wagons' upcoming album House Of Noise, following the release In It Together in March. The album is released on July 17, and pre-orders are available now.

The band have also announced the launch of Wagons World, a Patreon account that promises to give fans access to the band's inner circle and build a community around their music. Wagons World is described as "an assemblage of first-class rock'n'rollers dedicated to good times."

Fans can sign up for a variety of packages, although the £20/month option, which gains fans entry to the band's annual Wagons World Bar and Grill – a summertime BBQ with drinks and live performances – is already sold out.

Last week Massive Wagons confirmed their participation in Webfest 2, an online event organised to promote and support artists during the current lockdown.

Liam Mulpetre will be in charge of the Live Shred: The Heavy Metal Jukebox, while Reece Mastin and Sisters Doll will join in the fun from Australia.

Music fans are encouraged to buy the artists coffee and a cake, with all donations going towards those taking part.