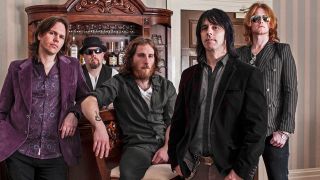 Many bands aresaid to have risen from the ashes of previous groups; fewer are publicly unveiled at their wake. But that’s what happened in 2015 when Northern Irish hard rock band Million Dollar Reload metamorphosed, mid-gig, into Blackwater Conspiracy – a looser, loucher outfit that mixes Aerosmith swagger with Bon Jovi soul. “We though: ‘Why drag out the whole process?’” explains frontman Phil Conalane. “Let’s just do it bang in the middle of a show.”

And so, mid-set, the Million Dollar backdrop was replaced by Blackwater Conspiracy’s and the band switched to their new laid‑back, bluesy material. “It sounds crazy but it actually worked and people got into it.”

M$R had released three albums and toured America, but they’d grown stale. “We’d had a good run, but we were writing new music that wasn’t sitting well with our previous stuff. We were relaxing and chilling out a wee bit more; we were less angry.”

A turning point was touring with Blackberry Smoke in 2014. “That was the catalyst for thinking: ‘Let’s just do what we want to do.’ Brit [Turner] and Charlie [Starr] from that band could see that we were toying with different ideas. They were very encouraging.”

The name was chosen due to the fact all four members live near the river Blackwater in County Tyrone. There’s zero connection, the singer is keen to point out, with a similarly named conspiracy theory involving private armies and sinister forces that’s popular in the murkier corners of the internet. “I wasn’t aware of all that until one of the guys called me up and said: ‘Have you heard about all this conspiracy stuff?’ I said: ‘I’m not fucking changing the name again!’ Fortunately we haven’t had any strange emails arrive in our inboxes. Not yet, anyway.”

Northern Ireland has produced some great rock music over the years, which Conalane puts down to the fervent support in the six counties: “There’s a healthy audience for rock over here. There aren’t many venues, but what venues there are are always packed. It would be a rare occasion if you go to a gig in Belfast and surrounding areas and there isn’t a healthy crowd, even for an unknown band.”

With their accomplished debut Shootin’ The Breeze in the bag, Blackwater Conspiracy themselves are unlikely to be unknowns for much longer.

“It was easy,” Conalane says of the recording. “We just don’t see the point any more of overanalysing things, cos it can get out of control and overindulgent. If a song works within the first five minutes then it’s good enough.”

Their new approach seems to be paying off. “With this band there’s no plan to ‘get back’ to where we were, no notions about world domination. We’re just playing the songs we love and, well, people seem to like them! Maybe we’ve got lucky again.…”

Shootin’ The Breeze is out now on Bulletproof 20/20 Records.

“We’re all into different things,” Phil Conalane says of his band’s influences. “Deep Purple, AC/DC, Jerry Lee Lewis… even Iron Maiden. Aerosmith’s Rocks, though, is the closest in terms of influence to what we’re doing with Blackwater Conspiracy now. For my money it’s probably their best album – so raw and gritty.”