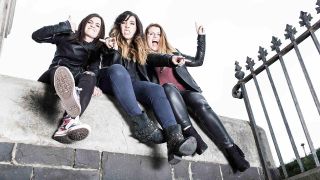 Australia’s Tequila Mockingbyrd are on a roll. A scrappy, larger-than-life trio with a penchant for high-octane rock’n’roll and the lifestyle that accompanies it, they’re the kind of band who’ll create havoc onstage, then drink you under the table in the aftermath.

Since singer/guitarist Estelle Artois, bass player Jess Reily and drummer Josie O’Toole relocated to the UK last year they’ve signed a record deal, played more than 50 explosive shows, and have developed something of a reputation amongst those who know what a good night out looks like.

The next step in the band’s masterplan is a new video for Never Go Home, taken from the band’s upcoming album Fight And Flight. The video is released ahead of a tour with Swedish rockers Bonafide next month. And, like the rest of the band’s material it’s a spiky, joyfully energetic thrash with a chorus as big as a house. Drummer Josie gave us the lowdown.

It’s tribute to youth, weekend antics and living life to the full. It was inspired by our favourite Melbourne watering hole The Esplanade Hotel, an iconic venue in the Australian music scene that’s sadly now closed for renovations. Let’s just say we made a fair contribution to its sticky, cider soaked floors!

Tell us about the video

The video depicts us in 50 years’ time, still doing what we do. Running amuck across our beloved home town, rocking out, undeterred by false teeth and catheters!

Classic Rock reviewed your album last July. Why’s it only coming out in the UK now?

We were lucky enough to receive some label interest so that put a (very welcome) spanner in the works. We had to wait until the timing was right and recently signed with Off Yer Rocka recordings. We’re really looking forward to finally getting the album out there with them on board.

We have so many ideas floating around. The majority of the first album was written over three years ago and a lot has happened since then so there’s certainly no shortage of material. We have a heap of dodgy phone recordings, riff ideas and lyrics waiting to be given a bit of love and turned into songs. Really looking forward to getting back into it.

You relocated from Melbourne to the UK last year. Why?

We’d been doing the Australian circuit for four years and were ready for a change. It’s pretty gruelling due to the fact it’s a 10 hour drive between major cities. We had a really good response to our debut single I Smell Rock n Roll over here, got on a few tours and festivals so we thought why not book one way tickets and see what happens.

How’s the experience been so far?

It’s been amazing. We’ve played over 50 shows across the UK and Europe since arriving and the response has been incredible. The weather takes a bit of getting used to but other than that…

What can fans expect from your dates with Bonafide next month?

We’ve been laying low for a couple of months so the batteries are now fully recharged and we are very much raring to go. Brace yourself for hair swishing, booty shaking, snare smashing good times!

What is it about Australians and rock’n’roll?

It’s part of the DNA. Every kid in Australia is brought up on a diet of fairy bread and Acca Dacca. That stays with you for life!

What up-and-coming bands from Melbourne should we listen to?

There’s just so much great music kicking around Melbourne these days. Dirt River Radio for a soulful blues-rock fix, our brothers in Massive and Black Aces for that classic Aussie pub rock sound, The Dead Amigos for something fresh yet dirty, and Dellacoma if you’re of a Southern rock persuasion.

Fight And Flight is released by Off Yer Rocka on March 24.