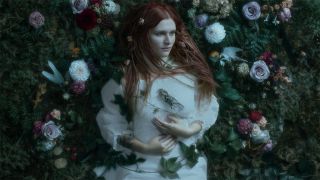 Iamthemorning singer Marjana Semkina has announced she will release her debut solo album Sleepwalking through Kscope Records on February 14. You can watch a special teaser trailer for the album below. The album will be released under an alternative spelling of her name, as Mariana Semkina

"It wasn’t my plan to ascribe any profound meaning or concept to creating Sleepwalking, it’s purpose was more personally therapeutic, it was supposed just to help me get through some dark times, and at the end of that period in my life I found myself, not only renewed but with a collection of songs that were too personal to release under any other name other than my own," Semkina tells Prog.

"I wanted to use Sleepwalking as a way to translate emotions in the most sincere and unrefined way. No sugarcoating, no filters, just creative, honest thought caught in the moment. Turning those dark times and feelings into pure creative energy, something beautiful, something that has purpose."

The album artwork once again highlights Semkina's love of love for classical art, unifying photography with the 17th-Century Vanitas movement.

“I am a big lover of classical art, and with this cover I wanted to create some sort of a unity between medium of photography and the Vanitas art movement, a genre of still life painting. The paintings of the genre usually contain collections of objects symbolic of the inevitability of death and the transience and vanity of earthly achievements and pleasures; it exhorts the viewer to consider mortality, which is extremely close to where this album came from.”

Sleepwalking can be pre-ordered here.