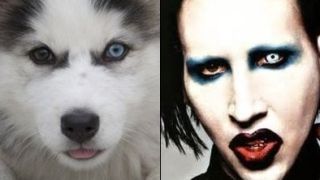 It has been revealed that Marilyn Manson requested a goat to play with while he was on the set of Salem. Because of this revelation, a sequence of events meant that one of our team spent an inordinate amount of time in a Manson-shaped wormhole. As we love a good meme at TeamRock, we felt duty bound to share the best of the pack with you. Enjoy.

We’re pretty certain that Marilyn Manson will never be the leader of the Catholic Church. Heck, we’d even put a tenner on it.

Someone has stared at the kind-faced Michael Cera and gloomy Severus Snape long enough to realise that it is in fact, a perfect mishmash of Manson when he appeared as a rollerskating waiter in Eastbound & Down. This is the sort of hairstyle everyone has had at least once in their life. You’re not laughing now, are you?

You only have to skim any page on the internet to realise the world is full of people who love to have a snipe. As such, some memes are as cruel as throwing a child’s favourite toy into a passing bin lorry. Like this one, which has taken an unflattering live shot of the God Of Fuck and mocked without mercy. Still, who doesn’t want pizza at all hours of the day?

There’s a lot of speculation about whether Marilyn Manson and Nicolas Cage are the same person. Admit it, you’ve thought it too. We’ve just noticed that Manson (or Cage) has eyebrows in the photo below. That just looks weird.

She probably feels the same way about Alice Cooper too. That’s what happens when you don’t spend hours looking at album artwork or not wondering why the woman you’re listening to has a deep voice.

It’s not even December and some people were already in the loft getting the Christmas decorations once the last trick-or-treater had left the front door. It’s times like this when we can completely empathise with a meme such as this. We wonder when Manson puts his tree up. Probably on Boxing Day, just to be contrary. Classic Manson.

The only thing this husky puppy has in common with Manson is a love of David Bowie. That’ll be something to do with the heterochromia, although the God Of Fuck has to wear a coloured contact lens to achieve the effect. We can’t imagine a young dog getting to grips with contact lenses. The fiddly bastards.

Remember when Manson started wearing sheet masks around the release of The Pale Emperor? If you want to get the look, but can’t get to your local beauticians, follow Jim Carrey’s lead and wrap your head with adhesive tape. Remember to get a cab everywhere because people on the bus will give you odd looks.

Sometimes, the secret to a good meme is to wilfully get a song’s lyrics completely wrong. Could this be the theme tune to the next series of The Great British Bake Off? It’ll need to do something to get its dangerous edge back, now that Mary Berry has moved on.