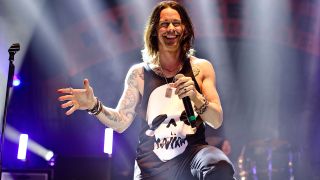 Kennedy describes himself as a reluctant frontman and says he’d never want to be so famous that he couldn’t go to the shops without being hounded. And he believes many up-and-coming young musicians feel the same way, meaning the fanfare that surrounded super-famous rockstars like Roth and Tyler back in the 1980s is unlikely to be repeated.

In an exclusive interview in the new issue of Classic Rock magazine, Kennedy says: “I’m a guitar player, that’s how I see myself.

“The frontman thing…I think I’ve become accustomed to it now, but I still feel more comfortable if I have my guitar.

“Some people thrive on fame and love the way it feeds the ego. But I think that’s very odd. To be so famous – which I’m definitely not – that you can’t go to the grocery store is kind of unthinkable.”

He continues: “The days of David Lee Roth and Steven Tyler I think are gone. It’s partly down to the way the business is – kids don’t want to be rock stars.

“But also, people want great music first and foremost. It’s about the songs. At least it is for me.”

Meanwhile, Alter Bridge have announced a North American tour for January and February of next year in support of latest album The Last Hero.

Issue 230 of Classic Rock magazine is out now in print and via TeamRock+. The cover stars are Pink Floyd and it also features Metallica, Bon Jovi, King Crimson, The Pretenders and more.

Myles Kennedy: The 10 albums that shaped my life