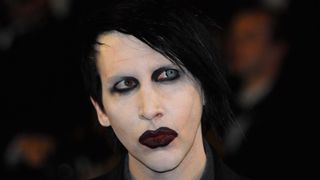 Marilyn Manson might be known for his eccentric outfits in his music videos, but he's taken his theatrics to the movies too. It seems only natural that the ultimate shock-rocker would dip his toes into acting once in a while, he's surely acting already, what with his peculiar onstage antics... right? But, when it comes down to the nitty gritty, are his flirtations with thespianism any good?

His latest role had him entering the Vatican, starring alongside Sharon Stone in The New Pope inspiring us to cast an eye back on the musician-cum-actor’s various roles throughout the years, big screen and small. Some were dope shows while others were more antichrist pooperstars.

The creators of this skew-whiff fairy-tale drama stated, “We wanted someone with the vocal ability to make our skin crawl.” So they drafted Manson to voice Peter Pan’s shadow, obviously. There’s some Jurassic Park velociraptor-style clicking going on, but if only they’d waited three years they could’ve picked a more apt candidate in the form of a certain US Presidential nominee. Especially seeing as one of the lines is, “Because you don’t belong!” It’s all right and it’s kinda identifiable as Manson’s signature drawl, but much like Corey Taylor in Doctor Who, the distortion whacked onto the vocals means this could’ve been done by any old goth.

Egged on by Rock You Like A Hurricane, looking like Nicholas Cage and mercilessly pumping away with the enthusiasm of an avid bird-watcher, Manson portrays a sleazy stranger who has sex with Courtney, one of Jawbreaker’s protagonists. The film’s basically a shit version of cliquey black comedy Heathers but, well, it’s got Manson and his moustache in it too; he’s hilarious in a way that can only be compared to Cradle Of Fear, which is basically this level of ridiculousness but for a whole film.

In what appears to be the most extreme edition of RuPaul’s Drag Race ever, Manson slips into something more comfortable as he plays Christina Superstar, based on the real-life drag queen of the same name in this retelling of New York’s debauched, overblown Club Kid scene. He makes unnerving noises and gets gunged more like the people in 90s British kids’ TV show Get Your Own Back rather than, say, Carrie; he ends up being restrained an awful lot and continues to make the aforesaid noises. He also tries driving a literal truck-load of party-goers while he’s off his tits on acid.

Essentially Blade for the taxman to enjoy, Rise: Blood Hunter possesses none of the charm nor actual story present in the vampiric Wesley Snipes slice-‘em-up. It does, however, have Manson as an everyman, goateed bartender who tips off Lucy Liu’s character in exchange for some dollar. Admirably, he does try and defuse a situation where Liu is held at gunpoint, but quickly scarpers when the barrel’s pointed his way. Fair enough.

Featuring Danny Trejo, Gary Oldman, Clive Owen, James Brown and cars driving really fast, The Hire’s ‘Beat the Devil’ short was already cooler than Santa Claus’ frostbitten corpse. Sure, this web series is literally a massive advert for BMW, but so what? It’s cool. Even when you think it can’t get any more ridiculous, ’Beat the Devil’ ends with a whiney Manson buzzing on the door, demanding, “Can you keep it down in there? I’m trying to read, okay?” before whipping out a bible and smacking the most angelic expression across his chops. And then Rock Is Dead sends us into the credits. Magic.

10. Bloke surreptitiously trying to drink through a straw – The Spoils Before Dying, Season 1 (2015)

Funny Or Die’s miniseries The Spoils Before Dying features scores of names you’ll be familiar with – Will Ferrell, Kristen Wiig, Michael K. Williams – but Manson makes an unexpected star turn in the first episode, aimlessly trying to sip his drink like he’s just been caught doing something inherently wrong. Sublime work, Mazza.

Manson shines in Wrong Cops because, well, he seems to be the only decent actor in this plotless pile of surrealist, er, comedy (?). Its random, Monthy Python-esque quality is akin to Tim and Eric – mentioned later – but it’s delivered with no substance, save for a 40-something Manson playing a moody teenager and declaring that “prostitution is wrong”.

Manson’s been an Eastbound & Down fanboy for some time now, even dressing as Danny McBride’s Kenny Powers, mullet and all, ready to quote him at any given moment. He finally snagged a guest slot on the HBO sports comedy in 2013, cameoing as a rollerblading waiter. “Welcome to Jellybeans! Can I take your… trash?” Such gusto. Such panache. Such ooft.

A crow explodes and turns into Alan Rickman’s Sheriff of Nottingham. No, that’s wrong. It’s just Manson guesting as the Dark Man, a force seeking vengeance on behalf of all winged creatures during Tim Heidecker and Eric Wareheim’s cringe-a-minute, weirdly addictive sketch show. “You have been unkind to the BIRDS of the WORLD!” he screams, turning Tim and Eric into model birds and another man into a toilet. Manson’s having a lovely time.

Tom Kapinos’ blockbuster comedy-drama series Californication is named after a Red Hot Chili Peppers record and, as such, its episodes’ titles are also musical homages. The Dope Show, unsurprisingly, features a guest turn from Marilyn Manson… as Marilyn Manson. “I’m just here for the narcotics,” he declares, proceeding to teabag an unconscious Tim Minchin. Here, the God Of Fuck is in a playful mood and portrays a healthier, more identifiable Marilyn Manson onscreen than he was at his gigs circa 2013.

The parodic premise of cult cartoon Clone High remains hit-and-miss even today – historical figures’ clones are lumped together in school, controversy ensues – but Manson’s guest slot is a burning, blasphemous bullseye. Our Antichrist Superstar’s animated counterpart gleefully skips and wails through a tune highlighting the importance of the food pyramid, also declaring himself a licensed doctor. Not sure we believe that bit, though.

“Most of us die as we are born… in agony.” Marilyn Manson uttered lines like this and more as he played maniacal surgeon/barber Thomas Dinley in the third season of the gloriously gory, magically mental supernatural drama Salem. Manson's character, plays a pivotal role as the twisted tale unravels.

Manson agreed to take the part before he'd even read it, or even heard the character description – it might have had something to do with the fact he'd written the opening tune though.

Talking to Rolling Stone magazine, Manson admitted that once it was spelled out to him, he was instantly hooked on the idea: “He said, ‘Well, you’ll be a barber that gives autopsies and travels somewhere in between the worlds of the dead and the living, and he has to deal with all of the things that witchcraft has caused and can’t fix – basically the alchemical end.' That’s pretty much my interest in regular life, so it would be the perfect fit."

Asia Argento’s pitch-black drama The Heart Is Deceitful Above All Things surely aims to be shocking, but Christ, what a turn from Manson: couch potato, drunk fuck, good-for-nothing bastard. He plays it perfectly, succumbing to seduction from his partner’s child. He doesn’t hold top billing or anything like that, but Manson’s pathetic pleading in the aftermath is genuinely stirring stuff. As is the rest of the film, actually.

Ah, yes. A hitman. Makes sense, right? Corey Asraf and John Swab’s directorial debut casts Manson as mysterious man-for-hire Pope, a bloke who lives in a cabin only accessible by water. So far, so Manson, but he really plays up those enigmatic elements of his personality here; not in a way like, say, when he was breaking around Antichrist Superstar, but rather a nuanced, quiet killer – the quiet ones are always the murderers. He’s restrained, collected, even funny, considering every word. And it’s hypnotic. Let Me Make You A Martyr is a revenge-drenched thriller packed with transfixing performances, but Manson steals the show.

Although the plotting gets a little ploddy towards the end – “It’s an internal beef” etc, etc, etc – Sons Of Anarchy’s drug-fuelled, leather-clad drama rolls into its final season by revealing its most chilling villain: Ron Tully. Manson’s portrayal of the Aryan Brotherhood’s incarcerated shot-caller is terrifying yet terrifically funny; he’s pure evil but when he says he misses his dogs, you almost feel sorry for him. Even after he rapes one of the main characters and reads him some Emily Brontë, you just sit there, slack-jawed, popcorn hanging from your lip, feeling dirty but unable to do anything but admire Manson’s ability to make you feel. Just like the characters he conjured for his Antichrist Superstar, Mechanical Animals and Holy Wood records, Manson’s portrayal of Tully succeeds because its conduit is a man believing, living, breathing every single word. One of Sons Of Anarchy’s all-time highlights and Manson’s onscreen masterwork.