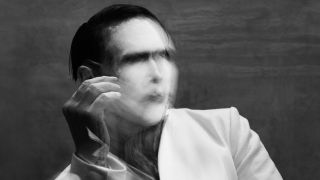 Marilyn Manson’s ninth studio album, The Pale Emperor, has been streaming on TeamRock.com all week, ahead of its release on Cooking Vinyl on Monday (January 19). Here’s our in-depth run-down of the Double M’s confident comeback.

Killing Strangers “We don’t need a bigger knife, cos we got guns,” intones Manson with mock menace as The Pale Emperor opens in brooding fashion, Killing Strangers slinking into view on a low-slung beat and a simple, understated rusty strings guitar motif. “We’re killing strangers so we don’t kill the ones that we love” the chorus runs, a typically provocative Manson musing upon America’s gun control policy (or lack of…) which resonates just as strongly now as the singer’s cautionary words did in Michael Moore’s 2002 documentary Bowling For Columbine. It’s immediately clear that this is a more clear-headed, focussed Manson than we’ve heard in years.

Deep Six The album’s first ‘proper’ single, Deep Six boasts The Pale Emperor’s best riff, a gnarly, hooky, punchy creation from new songwriting foil Tyler Bates (composer of the Guardians Of The Galaxy soundtrack) which dovetails nicely with the song’s stomping thrust. Does the chorus afford Manson the opportunity to yelp “six six six”? Please… of course it does, of fucking course it does. But how many other metal singers could deliver a knowing line such as “You wanna know what Zeus said to Narcissus? You’d better watch yourself…” with such deadpan conviction?

Third Day Of A Seven Day Binge Now this is just filthy. Bluesy, downbeat, tinged with Southern Gothic melodrama and reeking of bad decisions and profound regret, with Manson croaking like a meth-addicted fugitive from justice, this would sound just perfect soundtracking a particularly squalid sequence in Breaking Bad or True Blood. “Rather be your victim, than be with you” Manson groans on the chorus, before having his penis chopped off and diced into a particularly pungent gumbo. We’re pretty sure that’s what’s happening, anyways.

The Mephistopheles of Los Angeles “I don’t know if I can open up, I’ve been opened enough,” sings an atypically vulnerable-sounding Manson in the introduction to this memorable piece of self mythologizing, a song wherein Manson realises that his return from the dead – or at the least from the Hell-ish depths of that painful Download festival appearance a few years back – must come at a cost: “I’m ready to make my maker,” he defiantly concludes. The glammy rhythmic stomp is classic Manson, and this promises to be a highlight of upcoming live shows.

Warship My Wreck Sinister and sombre, this slow-burning piano-and-beats driven slice of cinematic melancholia builds and blossoms with an almost post-rock feel: stripped of the vocals this could be Cult Of Luna or Khoma. At one point Manson threatens to “Kamikaze into your soul”, a memorable metaphor for his legendary appetite for self-destruction.

**Slave Only Dreams To Be King **Prefaced by a spoken word intro taken from British philosophical writer James Allen’s 1902 text As a Man Thinketh (““Be not impatient in delay, But wait, as one who understands. When spirit rises and commands, The gods are ready to obey.”), this appears to be one of Manson’s trademark empowerment anthems, though in truth the Beautiful People-style drums are the track’s strongest feature.

The Devil Beneath My Feet Riding on a fuzzed-up bass riff, a simple, spacious beat and strafing guitar lines, this catchy little number sees Manson in zealot-baiting ‘There is no God’ mode: “Don’t need a motherfucker looking down on me…at least I know wherever I go, I got the Devil beneath my feet” he sings, with a hint of wickedness. Once upon a time, songs like this landed Manson in the Top 10.

Birds Of Hell Awaiting Bass-heavy, and ominous, musically this sounds like Josh Homme’s QOTSA on a brown acid trip: all twitchy and anxious and paranoid, with vultures circling overhead. More of a groove than a song, but striking all the same.

Odds Of Even Opening with an unnerving clamour of over-lapping, distorted voices, album closer Odds of Even channels the spirit of Tom Waits and early Nice Cave in a theatrical, dramatic, creepy crawl, with random clanking rhythms, staccato strings, tambourine shimmers and shards of ultra-distorted blues guitar adding to the sense of disquiet and foreboding. “This is the House of Death,” Manson intones. “Even Angels die in the arms of demons.” Good to know Mazza: cheers.

THE VERDICT: The best Manson album in a decade? Easily. Growing old disgracefully rather suits LA’s dark lord, and with The Pale Emperor Manson sounds like he’s having… not ‘fun’ exactly, but an enjoyably cathartic purge of inner demons. You go ghoul-friend!

Listen to the album here.