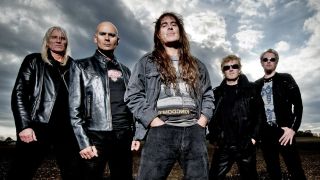 They’ll hit the road at the end of July for a run of 22 dates, with The Raven Age supporting for most shows.

At the time Harris said: “”We all really love the vibe and intimacy of getting up close and personal with the crowd.”

Maiden put plans to launch their 16th studio album on hold earlier this year when frontman Bruce Dickinson was diagnosed with cancer. He received the all-clear last month.

Tickets are available now from the venues.