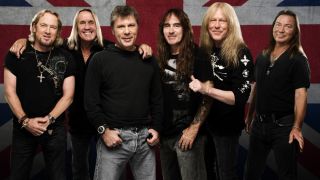 Iron Maiden frontman Bruce Dickinson has been given the all-clear following his cancer treatment.

He underwent seven weeks of medical attention after a tumour was discovered on his tongue, which forced the band to put plans for their 16th album on hold.

But following a recent MRI scan, specialists have now given the singer a clean bill of health.

Dickinson says in a statement: “I would like to thank the fantastic medical team who have been treating me for the last few months, resulting in this amazing outcome.

“It’s been tough on my family and in many ways it was harder for them than me.

“I’d also like to send a heartfelt thanks to all our fans for their kind words and thoughts. I’m a firm believer in trying to maintain a positive attitude, and the encouragement from the global Maiden family meant a great deal to me.

He continues: “Right now, I’m feeling extremely motivated and can’t wait to get back to business as usual, as soon as I can!”

Iron Maiden manager Rod Smallwood says the band won’t tour or play any shows until next year to allow Dickinson to get back to full fitness, although he confirms the album plans will now kick back into gear.

He reports: “For now, the focus will be on putting the finishing touches to the new Iron Maiden studio album and that is what we will be concentrating on over the coming weeks. The release however will definitely be this year.

“Meanwhile, I’d like to echo Bruce’s words and thank all Maiden fans. You have been incredibly patient, putting Bruce’s health and well-being first during this difficult time and the band and I appreciate all your positive support.”