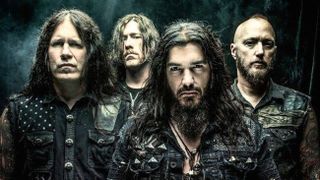 Machine Head have made their upcoming single Is There Anybody Out There? available to stream via Sirius.

The single will be released on June 3, but can be heard now at on the Sirius XM Octane website.

Frontman Robb Flynn says: “The song is about love, loneliness, racism, and not getting what is going on in the world and America.

“It’s very much about current events, but applies to a bigger picture.”

Earlier this year, Machine Head released a video showing them writing and recording Is There Anybody Out There? View it below.

Last month, Flynn was reunited with a guitar that was given to him by late Pantera guitarist Dimebag Darrell but stolen from his home six years ago.