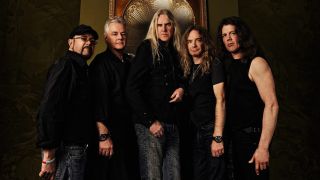 Saxon have announced a run of 10 UK shows as part of their Battering Ram World Tour.

The NWOBHM icons are on the road in support of their 21st album Battering Ram, released last year.

They’ll be joined by Fastway and Girlschool for the UK shows, which get underway in Newcastle on October 28.

Frontman Biff Byford says: “It’s gonna be a great tour with Fastway and Girlschool. I think this line up is unique, you don’t wanna miss it.

“Looking forward to battering some halls. Welcome to the metal church.”

Tickets go on sale on June 3 via myticket.co.uk and seetickets.com

Saxon play at this year’s Download festival and will also pay tribute to Lemmy at the Metal Hammer Golden Gods in June.