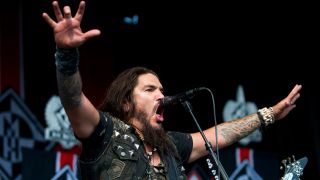 To celebrate Machine fucking Head making a return to the cover of Metal Hammer we've put together this list of everything you wanted to know about Machine Head in 26 alphabetical snippets – including Davidian, Locust, Oakland, Supercharger and Yellow. Seriously, what more could you want?

A is for AESTHETICS OF HATE

Not just one of the finest songs that Machine Head have ever written, but one of the angriest and most poignant too, Aesthetics Of Hate was written in response to an article written by William Grim on a website called Iconoclast. The article was called “Aesthetics of Hate: R.I.P. Dimebag Abbott, & Good Riddance”, wherein Grim described Dimebag as “an ignorant, barbaric, untalented possessor of a guitar”. Fuming, Robb Flynn penned this song, encapsulating the entire metal world’s feelings in six minutes of thrashing, turbocharged fury. Job done.

B is for BROWN EYES

Okay, B could also be for BURN MY EYES, or The BLACKENING… or, indeed, The BURNING RED. But Machine Head’s favourite drink seems more appropriate, somehow. Get the best quality vodka you can (Robb favours Grey Goose, which is well swanky) and mix with Coke and ice. Drink until oblivion.

C is for CHEERS, FUCKERS! And COVERS

It’s a relatively simple catchphrase, but it’s one that no Machine Head gig should be without. We like a drink, Robb likes a drink… cheers, fuckers! Meanwhile, C is also for COVERS. Machine Head have recorded a lot of other people’s songs over the years, including tunes by Judas Priest, Discharge, Black Sabbath, Bad Brains Ice-T and Rush. Oh, and Message In A Bottle by The Police, but that one was a bit iffy.

D is for DAVIDIAN

The first song on the first Machine Head album still sounds fucking immense 20 years on. That bellowed refrain of “let freedom ring with a shotgun blast” is as ageless as any in our world. Plus, THOSE RIFFS!! D is also for DAVE (McClain) and (Phil) DEMMEL, Robb Flynn’s loyal comrades.

E is for EPIPHONE

Robb Flynn is a man who loves guitars. So much so, in fact, that he was heavily involved in the design of his own signature ‘Love Death’ Epiphone Flying-V, quite possibly the coolest and most proudly metal-as-fuck guitar ever made. It’s got skulls on it and everything.

F is for FORBIDDEN

Although he rose to fame as leader of Machine Head, Robb Flynn’s contribution to metal was already pretty impressive before he forged his own distinctive path. One of the first bands he played with were Bay Area legends Forbidden. Robb left before they made their first album, 1988’s seminal Forbidden Evil, but he did co-write several of its finest songs, including iron-plated classic Chalice Of Blood.

G is for GENERAL and GODFLESH

Robb Flynn is also known as The General. Because he’s in charge. Sadly, he doesn’t have a special General’s hat. Maybe we could buy him one. Anyway, G is also for GODFLESH, one of the bands Robb was listening to a lot when conceiving Machine Head’s idiosyncratic sonic template. Listen to the British industrial duo’s 1989 album Streetcleaner and their influence on Burn My Eyes should become apparent.

H is for HARMONICS

An essential part of Machine Head’s unmistakable riffs, guitar harmonics are “played by preventing or amplifying vibration of certain overtones of a guitar string” …and yes, I copied that from Wikipedia. Fuck off. Anyway, Robb has stated that he stumbled upon harmonics as a young, aspiring guitarist, while trying to emulate the feedback on a Celtic Frost record. He couldn’t get feedback from his crappy practice amp, so he’d play a harmonic instead. Fiendish.

I is for IMPERIUM

The opening track from Through The Ashes Of Empires, the album that, in 2003, confirmed that Machine Head were back with a vengeance after a few wobbly years, replete with new guitarist Phil Demmel and their best batch of songs since Burn My Eyes. If Imperium doesn’t make you want to sprint into the mosh pit with fists flying, you’re probably dead. Or at the bar.

J is for JARED

Machine Head’s new boy. Plays the bass like a demon and sings like a metal angel. Has awesome facial hair. Used to be in a band called Sanctity. Is currently loving his life. And who can blame him?

K is for KILLERS & KINGS

After such a strong run of top-notch albums, we had no reason to doubt that Machine Head’s eighth studio effort would be another flat-out ripsnorter. But just in case, Robb and the boys released a demo version of this new song earlier in 2014. It fucking rips, especially live, as you will have seen if you went to any of the band’s recent intimate UK dates.

L is for LOCUST

Although topping The Blackening, Machine Head’s most successful album by some margin, was always going to be tricky, the Bay Area bruisers did a magnificent job of following it up with something equally brave and powerful. Unto The Locust’s (sort of) title track has since become one of the band’s biggest live tunes… although the insanely stirring Darkness Within is even better.

M is for MACHINE FUCKING HEAD

N is for NOW WE DIE

O is for OAKLAND

The main city in the Bay Area region known as the East Bay, Oakland is where Machine Head’s story began. It has a population of just over 390,000 people, is home to NFL team the Oakland Raiders and, apparently, has a Mediterranean climate. And some awesome metal bands, obviously.

P is for PINS & NEEDLES

Prior to roaring back at full power with Through The Ashes Of Empires, Machine Head found themselves in a state of flux and without a record deal. As an attempt to generate some interest from labels, Robb Flynn wrote Pins And Needles, a blatant “radio song” that strayed from the balls-out metal that had served the band well for many years. This proved to be a turning point for Machine Head, as writing such a commercial tune made Robb and his band mates realise that what they wanted -– needed – to do was be an uncompromising, kick-ass metal band and to hell with the consequences. As it turns out, that’s what the world wanted too.

Q is for QUEEN

Freddie Mercury and co. were just one of the bands Robb Flynn cited as an influence on the adventurous muscle-flexing of Unto The Locust. And, if you’re particularly eagled-eared, you may spot that one of the solos in album closer Who We Are sounds remarkably like Brian May’s solo in Bohemian Rhapsody. Possibly.

R is for RICHARDSON

Colin Richardson, to be precise. One of the most respected producers and engineers in metal history, Colin has worked with Machine Head on most of their studio albums, bringing extra power and precision to the band’s sound. He has also worked with Carcass, Slipknot, Fear Factory, Cradle Of Filth, Kreator, Napalm Death, While She Sleeps and many, many more. Legend.

S is for SUPERCHARGER

Machine Head’s much-maligned fourth album is actually MUCH better than people give it credit for. Following on from the Ross Robinson-produced The Burning Red, it showcased the sound of a band in transition but despite not quite matching up to Machine Head’s best work, it does boast numerous classic songs, including live favourite Bulldozer and brooding ballad Deafening Silence. Give it another go, you cynical bastards.

T is for TEN TON HAMMER

The opening track from 1996’s The More Things Change… introduced the talents of Dave McClain to the Head faithful. More importantly, it also provided Machine Head with a name for their party band alter-ego. Machine Head gigs are always killer. Ten Ton Hammer shows, which usually involve the band playing a bunch of covers and drinking a lot, are somehow even better.

U is for UNITED KINGDOM

We’re a canny lot in this country, aren’t we? While it’s certainly true that Machine Head are popular over the world, it was the UK that embraced the band first and with the most ferocity. Hooray for us.

V is for VIO-LENCE

Robb Flynn and Phil Demmel were both members of this Bay Area thrash crew back in the late 80s. Check out their 1988 debut album Eternal Nightmare for some properly vicious riffing.

W is for WOLVES and WIESBADEN

“Unleash the wolves …carnage has no rules!” One of The Blackening’s monstrous epics is Robb Flynn’s tribute to the Machine Head fan base. Aww, bless. W is also for Wiesbaden, a small town in Germany where Dave McClain was born. Fancy that.

X is for (E)X MEMBERS

There have been a few, let’s face it. Logan Mader, Chris Kontos, Adam Duce, Ahrue Luster, Tony Costanza, Walter Ryan… Fortunately, the current Machine Head line-up is shaping up to be the band’s definitive incarnation. Wait until you hear Bloodstone & Diamonds. Seriously.

Y is for YELLOW

It’s a song by Coldplay. Robb Flynn likes them. Don’t shoot the messenger.

Z is for ZEITGEIST

Director Peter Joseph’s 2007 documentary movie delves into an assortment of conspiracy theories, including the notion that the world’s banking elite manipulate global events. Robb Flynn has cited the movie as partial inspiration for In Comes The Flood, the new Machine Head album’s most politically charged song. Imagery from the film can also be seen in the video for Black Sabbath’s God Is Dead? We recommend you check it out.

CLICK HERE FOR THE NEW ISSUE OF METAL HAMMER