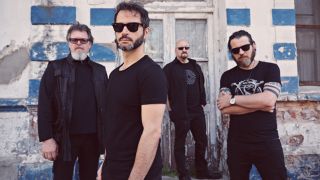 O.R.k have released a stream of their new album Soul Of An Octopus exclusively with Prog.

The band featuring King Crimson’s Pat Mastelotto on drums, bassist Colin Edwin, guitarist Carmelo Pipitone and vocalist and keyboardist Lef will launch the album on February 24 – but Prog readers can hear all nine tracks before Friday.

The band tell Prog: “From the off, there’s been a huge amount of positive energy surrounding O.R.k. Our debut album Inflamed Rides got a great response pretty much immediately.

“The subsequent shows across Europe and South America throughout the course of 2016, as well as being really enjoyable and well received, helped focus us as a complete unit and also allowed us to develop and expand the music in a live format.”

O.R.k previously released a video for their track Collapsing Hopes.

Speaking about the promo, the band said: “We really wanted to dispel any notion that O.R.k. is just some sort of studio based, remote file sharing exercise, so we’ve gone for a performance video with Collapsing Hopes, which hopefully goes some way towards illustrating the spontaneous energy, and intent that the four of us bring together when we meet in ‘meatspace.’”

Soul Of An Octopus is currently available for pre-order via the label’s website.

Soul Of An Octopus tracklist