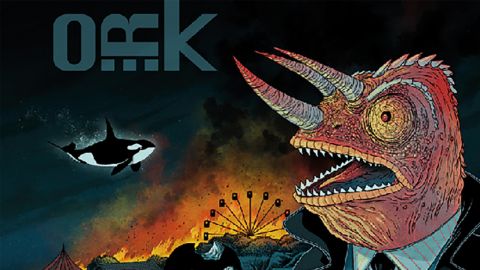 This might be the first album to bear the O.R.K. name but the richly diverse pedigrees of the band’s four members fuse to sound like they’ve been playing together for years.

Italian singer Lorenzo Esposito Fornasari has appeared in many stage productions and bands, notably Owls and Obake, while drummer Pat Mastelotto has played with numerous collaborators since founding Mr Mister, including serving as a pivotal member of King Crimson since 1993. They’re joined by Porcupine Tree bassist Colin Edwin and guitarist Carmelo Pippitone from Marta sui Tubi, themselves prone to collaborating fiercely. Inevitably, the Crimson influence rears up in the monolithic riffs, but one of the band’s strengths is its effortless diversity as they straddle reflective ballads (Pyre), atmospheric instrumentals (Black Dust) and convoluted wall-of-sound vehicles where each member seems to be straining at the leash to wring that extra ounce of emotional wallop out of their instrument (Breakdown). The Insignificant closes the album with a slab of electronic funk. It’s a fine encapsulation of the sense of fun the four are having as they whip up an electric storm that takes no prisoners but could seduce an army.