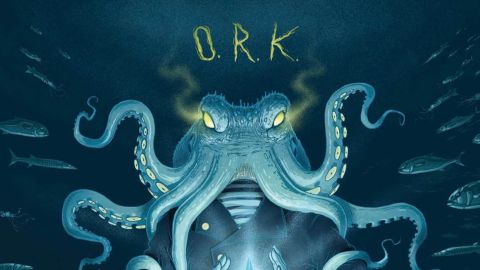 After touring their debut Inflamed Rides in 2016, O.R.k. have somehow found time to write a follow-up. For, rather like the new album’s eponymous creature, O.R.k. have tentacles in all sorts of projects, including Porcupine Tree, King Crimson and Marta Sui Tubi.

On Soul Of An Octopus O.R.k. have taken the characteristics of their debut – psychedelia, math-core and space metal – and refined the groove. Opener Too Numb takes a spooky Portishead-like groove and grows it into mesmeric trippy rock through which singer Lef’s grimy vocals and shouts dive and soar. But they’re no one trick pony. Octopus includes druggy blues riffs (Collapsing Hope) that wouldn’t shame Black Label Society as well as strange acoustic chill-out (Heaven Proof House). Part of the reason Octopus is a grower lies in the fact that secreted amongst the spooky guitars and whirling keys are some genuine tunes. Till The Sunrise Comes – which closes the album – is unafraid to take its time, building from a simple guitar and violin riff into a malevolent storm that feels on the edge of falling-apart. In less skilful hands it could be cliché. In the hands of O.R.k. each decision is thought-out. The effect is mesmeric and satisfying.