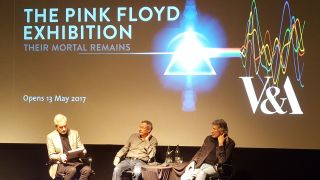 Roger Waters has announced that his forthcoming album will be titled Is This The Life You Really Want?.

Speaking at the launch of the forthcoming Pink Floyd exhibition at London’s Victoria and Albert Museum alongside Pink Floyd drummer Nick Mason, Waters’ revealed “I’m just in the process of finishing my new album. I finished the vocals yesterday and Nigel Godrich who is producing it has begun mixing it. It’s called Is This The Life You Really Want?. I’m going on the road this summer, taking a tour called Us And Them, around America in the summer and then around the world throughout 2018.”

The pair made a rare public appearance at London’s Mayfair Hotel earlier today as the impressive The Pink Floyd Exhibiton: Their Mortal Remains was launched. The exhibition, which marks the 50th Anniversary of debut album The Piper At The Gates Of Dawn and single Arnold Layne, will run between 13 May and 1 October, and has been created with the V&A in partnership with Pink Floyd’s creative director Aubrey ‘Po’ Powell and Michael Cohl and Iconic Entertainment Studios in collaboration with designers Stufish who created Waters’ recent Wall extravaganza as well as Pink Floyd’s live Division Bell set.

Every chapter of the Pink Floyd story is represented, with more than 350 objects and artefacts on display, many of them never seen before, including hand-written lyrics, musical instruments, letters, original artwork and stage props. The exhibition will even feature the original punishment book and cane from the band’s time at Cambridgeshire High School For Boys (now Hills Road Sixth Form College) which was attended by Waters, Syd Barrett and Storm Thorgerson.

“I’m particularly looking forward to see the cane,” laughed Waters at this morning’s good humoured press conference. “The headmaster at that time didn’t really have his heart in corporal punishment so it was a bit flimsy. But they found the school punishment book and among the entries for 1959 is ‘Waters: Six strokes for fighting’. That’s my entry of which I’m inordinately proud (laughs).”

Added Nick Mason: “I’ve been told that the boy from the Floyd set-up who was punished the most was Storm Thorgerson and that so fits. I recall at his funeral a friend wonderfully described him as a man who wouldn’t take yes for an answer.”

Asked if they’d consider performing The Wall again to highlight the intended barrier suggested by President Trump to be erected along the USA/Mexico border, Mason joked, “I did get sent a picture of Donald Trump and a wall and it said ‘We’re going to build a wall and Pink Floyd are going to pay for it!’.”

Waters however, was typically more forthright. “I don’t know. I get asked quite often if I’ll ever do The Wall again. I’ve always said I’d do it again if they ever figured out what to do with Israel and Palestine and get rid of that appalling security barrier there. If there was some kind of resolution over the way we organise conflict resolution between nations, and get rid of the enmity that exists and people realise that there is no us and them and that we’re all human beings and we all have to figure out how to live together, because at the moment the systems that we’re using are destroying the planet faster than we think, as an act of celebration of that move towards a more humane way of organising ourselves, I’d be only too happy play a concert in some place that was significant.”

Inevitably the question of a possible reformation with Gilmour, even playing at Glastonbury, reared it’s head, with the pair good naturedly putting the matter to rest.

“It’d be nice to add it to the list of things,” admitted Mason. “It’d be fun to do it. But I don’t think it’s very likely. But if I had the opportunity, yes, I’d do it.Would David be involved? I don’t know. We’ll have to ask him.” (laughs)

“Oh the old ‘Why don’t you get back together’ question,” joked Waters, feigning a sigh. “It’s so dull…”

Tickets for The Pink Floyd Exhibiton: Their Mortal Remains are on sale now, priced £20 (Monday-Friday) and £24 (weekends). Concessions are available. V&A members go free. Advanced booking is strongly advised. Tickets are available in person at the V&A, online at the V&A website or by calling 0800 912 6961 (booking fee applies), or from ticketing partners Ticketmaster, LOVETheatre, See Tickets and Encore.