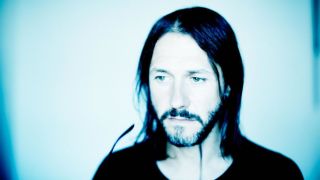 “I grew up in a small town in Wales where there wasn’t much else to do apart from listen to music or be in a band. A lot of my friends were into rock so we would listen to anything from Yes to King Crimson, but it was probably my old friend Brian Sperber who first got me into Rush. He works as a sound engineer now and, a few years ago, he asked me if I’d like to come and have dinner with Alex Lifeson. We had a really good meal with lots of wine and we ended up going back to his hotel room to chat. We stayed up until daylight and then he had to get a plane because they had a gig that evening. It was pretty rock’n’roll and he’s a really interesting guy.

“I’ve always been really into Pink Floyd as well, and I absolutely love Mogwai – I think they’re amazing. You probably wouldn’t think of Feeder sounding like Pink Floyd, but a lot of the dynamics and ideas are definitely influenced by listening to them. The atmosphere they created through their music was amazing. We’ve got a lot of stuff live that really goes off and is quite trippy and atmospheric, which has been influenced by them. The first album of theirs I listened to was Animals, when I was probably about 10. There was something about it that I really liked; it has some really interesting lyrics and David Gilmour is a great guitar player. That and The Dark
Side Of The Moon have definitely influenced me as a writer. They still sound so amazing now – they just take you on a journey and I love music that does that.

“When I was about 16 or 17, I was actually in a prog band called Multi‑Story. They were one of the biggest bands in the area at the time, but their singer had just left so they asked me to fill in. They were trying to be like Yes and their original singer sounded like Jon Anderson. I couldn’t sing that high – I was more like John Wetton at the time! It was a good experience, and a whole new world for me.”

Feeder’s All Bright Electric is out now on Cooking Vinyl. Visit Feeder’s website for more.