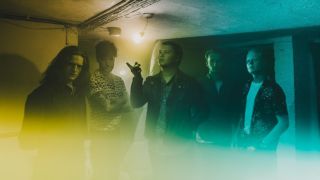 Fizzy Blood have released a stream of their brand new track titled C.F.O..

Last month, the band launched a video for their Summer Of Luv EP track ADHD, with C.F.O. recorded recently in Brighton with Alex Newport.

Guitarist Paul Howells says of Newport’s involvement: “He helped us experiment with the sounds and textures and then glue it all together without us even realising he was doing it at the time.

“We’ve recorded a few songs that we feel are the best things we’ve ever created, and we’re very proud to present them.”

He adds: “Broadly speaking, C.F.O. is a warning about pushing people away who only had your best interests at heart. It’s easy to lose sight of things when you’re mired down in a single-minded pursuit. So what I’m trying to say is, stop and smell the roses every once in a while, you’ll thank yourself later.

“This is one of those things that is better left up to your imagination. Whatever you think C.F.O. stands for, that’s what it is.”

Fizzy Blood have just wrapped up a run of shows with Spring King and will embark on a short run of headline dates across the UK later this month with Forever Cult. Find details below.