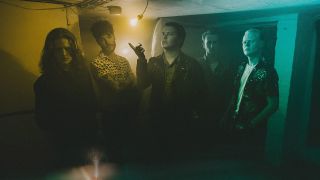 If you’ve been paying attention, you may have come to notice that Leeds-based psych-rock quintet Fizzy Blood are something of a favourite over at TeamRock Towers. We’ve had them included in festival round ups, we premiered the video for their entirely summer-appropriate new single, Summer Of Luv, and we’ve had them spinning on the TeamRock Radio playlist for months. Basically what we’re saying is when they blow up and get massive, just remember that you saw them here first.

Now, it seems only right to inaugurate them to the TeamRock New Band Of The Week hall of fame. The five-piece, who have been making music together since they met in Leeds in the early 2010s, piece together elements of spacey psych-rock, buoyant indie pop and straight up punk rock for a sound they’ve made their own. Is psychedelic pop punk a thing? Who cares, it is now.

Below we catch up with the band’s frontman Benji Inkley to find out more about the band, what they’re up to and what they’ve got coming next.

Who are Fizzy Blood?

Benji: “Fizzy Blood are simply five dudes who get together and rock out with more than just one appendage out.”

Benji: “My name’s Benji, I’m the singer and I strum the chords. I mean, you could go as far as to call me the frontman [laughs], but please don’t [whoops, sorry Benji, we already have]. There’s also Paul Howells and Tim Malkin on guitar (Tim also dabbles on the keys). There’s Ciaran Scanlon, who’s become a bit of a poster boy for the band over the past year with his on stage faces, on bass, and finally there’s Jake Greenway on drums. Contrary to popular to popular belief none of us are actually FROM Leeds, although we’ve all lived there at some point and it’s where we all met. A few members still live there and it’s the city we call our band’s home and HQ. Plus it’s much easier to say Leeds in interviews.”

Benji: “Paul (guitarist) and I have been playing music together for over 10 years now as we grew up together in Lincoln. Playing in bands on and off, that kind of thing. We only really started taking it more seriously around 2009⁄2010 when we became a proper touring band, laying the foundations for Fizzy Blood to be built upon. In our previous band we met a number of friends, including our booking agent, who we still work with to this day.

Anyway, Paul left for Leeds College Of Music, and around that time we wanted to start a new band after the decline of our previous one, [so] we put out an ad on the LCOM message board for a drummer. Jake was the first person to reply. I think we were very lucky in that regard. As not only is he a great drummer, but he knew Ciaran and Tim who also became members of the band shortly after his audition.”

Benji: “We all have a shared love and passion for Queens Of The Stone Age. It’s also a comparison that is drawn a fair bit which is nice as well. I believe that when we were writing our very first demos for the band we were listening to a lot of Dinosaur Pile-Up but although I think we’ve moved away from that particular type of rock music you’ll still get a bit of a roar every now and again.”

What’s the story behind the name of the band?

Benji: “Basically Paul and I were massively into Reuben growing up – I owe the frontman Jamie Lenman a lot of credit for influencing my songwriting style. They’d been long split up when Paul and I were writing new tunes, then Jamie Lenman announced his solo career with first single Fizzy Blood… So we stole it cause it sounded cool [laughs]. It’s a little wink in the direction of one of our heroes.”

Leeds has a real strong heritage when it comes to underground music. How does it feel to become part of that legacy?

Benji: “Being a band in Leeds is great. There is a real sense of community around particular venues within the city, such as the legendary Brudenell Social Club. There’s just a conveyor belt of quality bands that seem to spring up in waves. There’s a number of quality promoters to contact if you’re just starting out as well as bigger venues for bands further along in their careers. It’s definitely a great place to be.”

Benji: “I think our style of writing and the range of sounds we use makes us pretty unique. Obviously it’s your standard rock band set up, guitars, bass, keys and drums, but it’s the way in which we voice those instruments that’s different. I think you’ll struggle to find a solid comparison to us. We’ve had everything from Radiohead to System Of A Down.”

Tell us about the new single and EP?

Benji: “Our new EP is called Summer Of Luv and was recorded at Greenmount Studios in Leeds. We’re all really excited about getting it out there and seeing people’s reactions.

It’s a slight stylistic change from our previous EP Feast – it’s a more natural sound and a maturity has developed in our writing and structure, although we’ve still got a way to go!

ADHD will be the last single released from the upcoming EP. The bridge in that song is one of favourite parts of the new record as I think it sounds huge and it’s a riot to play live.”

What’s Summer Of Luv about? What are its themes?

Benji: “We named Summer of Luv after the second track we released off of the record. We hid away for a week in the hills in a town named Glossop during 2016 and just wrote songs. We wrote the majority of songs for this record during that week. The song Summer of Luv is actually about our trip to America, but we felt like the name captures everything we wanted to say in the title of the new record. It’s pretty much a diary of our Summer of 2016.”

What drew you to the themes you cover on the EP?

Benji: “What we cover lyrically on the record depends on how we’re feeling at that specific time of writing. If we feel strongly about something… we write a song about it. We cover everything from travelling, manipulation, ghosts and mental health. Sounds like a right laugh doesn’t it?”

What, in your opinion, is the stand-out track on the EP?

Benji: “I’m not sure how many people would agree, but I think Summer Of Luv is a great tune. I really like [how] the bass evolves throughout and the guitars just float on top of it. Having said that, we get a lot of compliments live about a tune named Healing Isn’t Free, which we haven’t actually released yet. But I think for me Summer Of Luv still wins it.”

What’s your favourite story/anecdote from recording the EP?

Benji: “So I’m recording vocals, convinced that I’m singing a certain line correctly. It was a really odd sequence of notes but I was convinced. And I kept on getting the control room in my ears, “just take that one again mate”. So after about 40 takes I was just like, “Gimme a minute”. I went out and had a Snickers, literally came back in and smashed out the rest of the EP. So yeah, those Snickers adverts with the ninjas and Rowan Atkinson and all that I think is pretty spot on.”

What do you hope people will take away from the EP, and your music in general?

Benji: “I just hope that they feel something unique and remember it after they pause it or turn the track. If we can do that, we’ve done our bit.”

Benji: “Although going on tour with While She Sleeps was incredible, and playing larger venues consistently over the span of a month was amazing, going to South Korea with the guys and playing over there still ranks as one of the greatest experiences of life, let alone time in the band. Everything was so similar yet vastly different, and having a street full of Koreans awkwardly sit down and clap along to our music whilst we’re giving it the beans was awesome.”

How does it feel to be heading to Reading and Leeds this summer?

Benji: “Leeds was my first festival, as was Reading for a couple of other members of the band. So it’ll be a very special experience. We’re playing the Lock Up, which was the first stage I went to in 2008. I can’t wait!”

What are you most looking forward to about the future?

Benji: “That literally anything could happen. Being in this band has taught me never to take anything as a certainty until you’re actually physically there. We got the WSS dates out of nowhere and have had other promising ventures expire. So yeah, anything can happen but I think we’re up to the task.”

Benji: “We’ve not even released our second EP yet but we’re currently writing for new releases. We’ve got a bit of time now so we’re going to go away for a little bit and get our song writing hats on.”

Fizzy Blood’s EP, Summer Of Luv, will be released on September 1st via Killing Moon/Alya Records, and you can pre-order now. The single of the same name is available now. You can catch the band live at Reading and Leeds Festivals on 25-27 August.

New Band Of The Week: The OBGMs