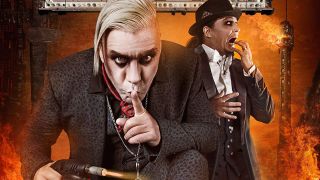 Lindemann have launched a video for their new single Frau & Mann.

It’s the latest material taken from the duo of of Rammstein frontman Till Lindemann and Hypocrisy and Pain’s Peter Tagtgren’s latest album F & M, which launched last week through Nuclear Blast.

The Sergey Minadze-directed video clocks in at over seven minutes and takes the form of a short film featuring Fargo actor Peter Stormare – who also appeared in the promo for Steh Auf –  and Ukrainian singer and composer Svetlana Loboda, along with Lindemann and Tagtgren.

Speaking about the follow-up to 2015’s Skills In Pills, Lindemann told Revolver: "We have no rules – it's about the emotions. We also want to create something new, something that we haven't done before, whether it's with Lindemann or our other bands."

Tagtgren added: “We don't know what the result is going to be, we're just going crazy. If it makes us happy, then it's done.”

Lindemann will head out on tour across Europe throughout February in support of F & M.

Lindemann: F & M
The duo of Rammstein's Till Lindemann and Hypocrisy and Pain's Peter Tagtgren have just released their new album F & M. It's the follow-up to 2015's Skills In Pills.View Deal