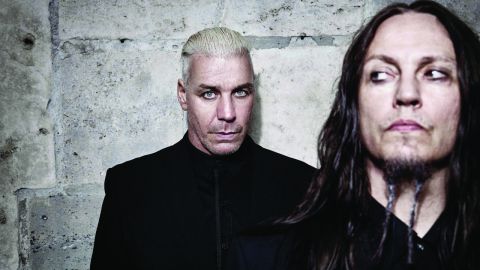 Forget the Brothers Grimm – Lindemann are the new sick storytellers in town.

The band come across like an industrial Steel Panther with Till a German version of Michael Starr, timing the delivery of his lyrics to cause the maximum amount of shocked laughter from the listener as each sentence progresses. ‘Your flappy butthole/A soggy cave,’ he sings on Fat, before intoning ‘I put in my parts/And let them bathe.’ Then there’s Ladyboy’s deadpan lyric: ‘Dressed for fun/No romance/Two in one/I’ll take my chance.’ Not only are the songs brilliantly tongue-in-cheek, but the sometimes-broken English adds another layer to their humour.

The centrepiece is Golden Shower, where the lyrics get more deliciously ridiculous with every second: ‘Golden shower, let it fly/From your pretty cunt!’ Till proclaims. ‘Please stand up/Pink hairy sky/I creep down and wait, wait for you to cry.’ The considerate lover then elevates his partner further, with the words: ‘French kisses falling from your hips/And it seems like fairies flying/And it feels like angels crying/Cunt, cunt, your pretty cunt!’ It’s like Rammstein’s Pussy: The Director’s Cut.

While Till’s ‘other’ band trade in big, weighty riffs that inspire flamethrowing drama and spectacle, Lindemann is more industrio-lite EBM – floor-fillers for New Rock-wearers who fancy doing an amped-up two-step, or a soundtrack for cheeky playmates at a fetish club. The stompiest, campest tune of all is Cowboy, a ludicrous tribute to the fantasies of someone who’d always hoped to be an outlaw and get all the ‘chicks’ thanks to ‘big, big dicks’. There are some brawnier surprises, though – the ambitious, creepy, orchestral fairytale ballad of Home Sweet Home sounds like a distant cousin of Rammstein’s Sonne, and the half-whispers and tolling bells on Yukon are used to pleasingly creepy effect.

Lindemann’s balls-out absurdity stands in contrast to Richard Kruspe’s side-project, Emigrate, which was a more serious artistic endeavour involving heavyweight appearances from Lemmy, Marilyn Manson and more. Terrible twosome Till and Peter seem more up for a laugh, delivering songs with a wink while keeping one eye open so they can relish your reaction. Both bands have their merits, but somehow seem lesser than the sum of their Rammstein, um… parts.

Rather than feeling like a brand new proposition, Lindemann’s debut feels like a diversion while we wait for the next chapter of Rammstein, hoping they haven’t closed the book on the band. But with its kinky designs and synthy lines, it’s good, unclean fun.